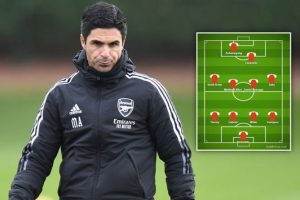 Arsenal boss Mikel Arteta could stick to a winning formula for the trip to Liverpool today (5.30pm). Arteta has adopted a 4-4-2 formation in recent weeks which has seen the Gunners win their last three Premier League matches. Express Sport looks at how Arsenal could line up for the toughest test so far in their unbeaten run.

Arsenal will need Aaron Ramsdale on top form to thwart the likes of Mohamed Salah.

Salah has a superb record against Arsenal and will be aiming to add to his 10 Premier League goals so far this season.

Ramsdale is yet to lose in a Gunners shirt and it will have been a good weekend for Arteta if that is still the case come the end of tonight’s match.

The summer signing has grabbed his opportunity with both hands since replacing Bernd Leno between the posts.

One of Arteta’s biggest dilemmas is which left-back he will select.

Nuno Tavares has impressed in recent weeks but Kieran Tierney has now returned to full fitness.

Arteta may opt for Tierney to add a bit more experience to an otherwise youthful side.

Takehiro Tomiyasu and Ben White will likely line up on the right side of the back four.

Gabriel should play alongside White despite travelling to Brazil in the international break.

Thomas Partey wasn’t able to feature for Ghana in their recent internationals due to injury.

Arteta was non-committal over his availability in his pre-match press conference but suggested he would not be ready to start.

That could mean Ainsley Maitland-Niles gets back-to-back starts in the middle of the park alongside Albert Sambi Lokonga.

Bukayo Saka and Emile Smith Rowe will continue in the wide positions after impressing for England in the international break.

Another dilemma for Arteta will be whether he sticks with both of his experienced strikers.

Alexandre Lacazette was handed his first start in the 3-1 win over Aston Villa and has also started the next two wins against Leicester and Watford.

Lacazette has not scored in those matches but his work-rate dropping deep has played a key role in Arsenal’s recent success.

Arteta could call upon Martin Odegaard instead if he wanted to adopt a slightly more conservative approach.

Pierre-Emerick Aubameyang is an injury doubt after missing Gabon’s second match in the international break but should be fit to play this one.