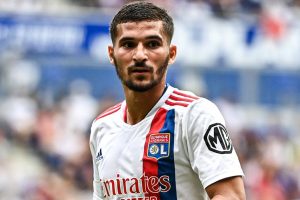 Houssem Aouar has played down talk of a potential move to Arsenal by insisting it is his "dream" to play Champions League football with Lyon again.

Aouar, 23, has attracted interest from the Gunners over the past year, with reports suggesting he was identified as a top transfer target by Mikel Arteta and co last summer.

However, after failing to agree a deal with Lyon Emirates chiefs turned their attention to Thomas Partey, forking out £45million to prise him away from Atletico Madrid.

Despite Partey's arrival, as well as the £35million signing of Martin Odegaard over the summer, it is believed Arsenal are still keeping tabs on Aouar amid their desire to strengthen in midfield.

But in a major blow for Arteta, the French star has effectively ruled out a transfer by setting his sights on playing for Lyon in the Champions League again, having failed to qualify for the past two seasons.

"As someone who’s from Lyon, to be able to play in the Champions League in this stadium is something I’d like to be able to do again – all of that is down to qualifying this season," he said.

Do you think Arsenal will be able to offer Houssem Aouar European football next season? Let us know in the comments section below.

"Then I’d like to win a trophy, because that’s what’s missing the most for me at this club.

"I’m fully concentrated on Lyon. Playing in the Champions League again with my hometown club is an objective and a dream of mine."

It remains to be seen whether Aouar sticks with that objective if Lyon miss out on Champions League qualification again this season.

Nevertheless, Arsenal are not expected to be in the competition themselves next term amid their poor form under Arteta.

The Gunners lost their three opening matches of the new season, conceding nine goals and failing to score in that time.

They finally found the back of the net in a narrow 1-0 win over newly-promoted Norwich at the weekend, but it was by no means a performance to savour.

With champions Manchester City likely to be battling it out with Chelsea, Liverpool and Manchester United at the top of the table this season, Arsenal's realistic target will be to get themselves back into the Europa League after missing out on European qualification last term.