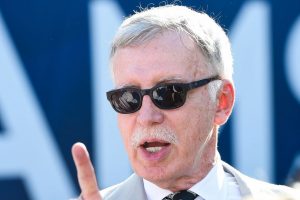 Spotify co-founder and CEO Daniel Ek is in the midst of a much publicised attempt to buy Arsenal from current owner Stan Kroenke.

The Swedish billionaire declared his interest in completing a takeover last month, tweeting: "As a kid growing up, I’ve cheered for @Arsenal as long as I can remember. If KSE would like to sell Arsenal I'd be happy to throw my hat in the ring."

Arsenal legends Thierry Henry, Dennis Bergkamp and Patrick Vieira are all involved in the attempt, with Henry explaining on Sky Sports' Monday Night Football that Ek wants to "inject the Arsenal DNA back into the club".

However, Kroenke is adamant that the club is not for sale, releasing a statement which read: "In recent days we have noted media speculation regarding a potential takeover bid for Arsenal Football Club.

"We remain 100% committed to Arsenal and are not selling any stake in the Club. We have not received any offer and we will not entertain any offer.

It is not the first time that Kroenke Sports and Entertainment (KSE) have rebuffed attempts to get them to sell their shares in Arsenal, with Alisher Usmanov's attempt to take near total control of the club in 2017 being getting shut down by Kroenke.

At the time, Kroenke was the majority shareholder, owning 67% of the club, while Usmanov owned 30%.

The Russian billionaire launched a $1.3billion (£1billion) bid to buy the remaining shares but Kroenke had no intention of selling, releasing a similar statement to the one sent out regarding Ek's bid.

It read: "KSE UK, Inc notes the recent media speculation concerning its shareholding in Arsenal Holdings PLC and confirms its shares are not, and never have been, for sale. KSE is a committed, long term investor in Arsenal and will remain so."

In 2018, Usmanov ended his attempts to take control of Arsenal by selling his stake to Kroenke, meaning KSE became the sole shareholder.

Given the statement they released last month, it is clear that Kroenke's stance has not changed, meaning it is unlikely that Ek's attempt to buy the club will be successful.