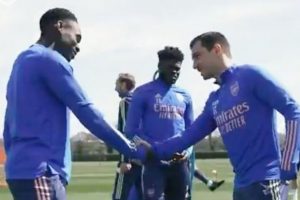 Arsenal: Folarin Balogun reacts to making his debut for the club

Arsenal right-back Cedric Soares congratulated Folarin Balgoun on his new contract in a classy gesture at training on Tuesday. Balogun ended speculation over his future by penning a new four-year deal at Arsenal on Monday. The teenage striker’s previous deal was set to expire in the summer and a host of clubs across Europe were linked with his signature.

Balogun has struggled for game time in recent months, making just one substitute appearance in 2021.

But the 19-year-old has been a regular in first-team training and was welcomed by Cedric at Tuesday’s session.

Portugal international Cedric walked up to the academy star, shook him by the hand and said “congratulations bro”, before embracing in a hug.

Balogun will be hoping to be part of the match day squad for the first leg of the Europa League semi-final against Villarreal on Thursday. 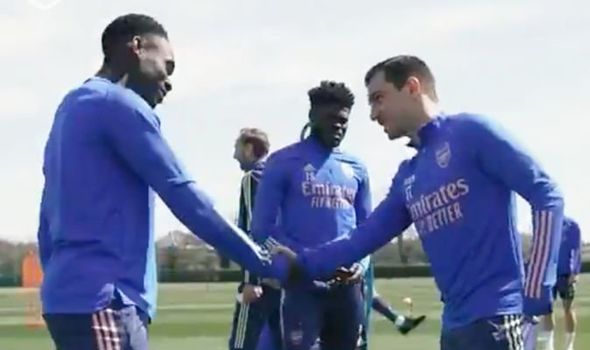 The forward is one of a number of youngsters to have impressed under Mikel Arteta this season.

Balogun says the performances of Bukayo Saka and Emile Smith Rowe have served as huge inspiration to him.

“Bukayo and Emile have shown me that if you just stick at something for long enough, eventually it will pay off,” Balogun told Arsenal Media.

“I take huge inspiration from them. I thought both of them seemed ready when they were called up each and every time. 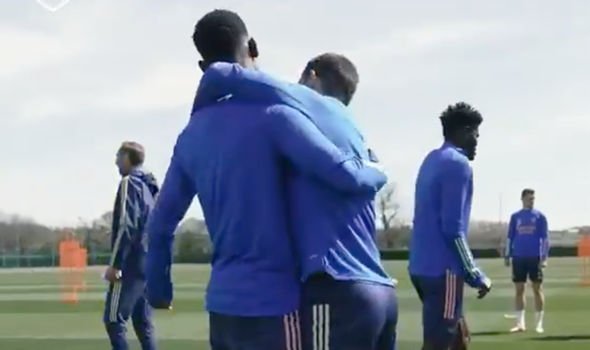 “I thought they definitely prepared, not just physically but also mentally, for the challenges. I think that’s something I’ve learned from them.

“Every time I come over, all the lads are friendly but in particular I would say the strikers’ union [have helped me most].

“Laca [Alexandre Lacazette], Auba [Pierre-Emerick Aubameyang], Eddie [Nketiah], we all talk, we all get along and laugh.

“They’re just continuously trying to give me little tips here and there, things to help me improve my game. That’s good to see.”

Arteta insists the hard work has only just begun for Balogun and has challenged him to fulfil his potential.

“We have been extremely impressed with Flo this season,” Arteta said.

“He has continually shown his natural ability in many training sessions with us and we have been equally impressed with his early integration into the first-team squad on matchdays.

“He has given us glimpses with the performances and of course with his two goals already for the first team.

“The hard work starts here for Flo and we are all looking forward to supporting and working with him in the years to come.”