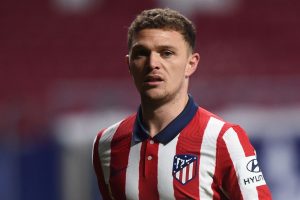 Arsenal swapping Hector Bellerin for Atletico Madrid right-back Kieran Trippier is a "genuine prospect" this summer, according to reports.

Bellerin, 26, is said to be desperate to leave the Emirates before the transfer deadline passes at the end of the month after growing frustrated with life in north London under Mikel Arteta.

The Spaniard did not feature in their opening 2-0 defeat away at Brentford last week amid his desire to secure a move back home.

Both Atletico and La Liga rivals Barcelona are keen on signing him, but Arteta reportedly wants to receive a player in exchange as part of any deal.

Trippier and Barca's Emerson have been mooted as potential options, and football.london claim the former is a very realistic one despite just under two weeks remaining in the summer transfer window.

Arsenal could even include Alexandre Lacazette, who missed last week's trip to Brentford with a mystery illness, in an exchange package.

Do you think Arsenal should Hector Bellerin for Kieran Trippier? Let us know in the comments section below.

The Gunners were heavily linked with a move for Trippier earlier in the window, while Manchester United also set their sights on bringing him back to the Premier League.

However, Atletico have so far managed to fend off interest in the former Tottenham star, who helped them claim the Spanish title last season.

Trippier enjoyed a four-year stint with Arsenal's north London rivals Spurs after spending as long at Burnley, making 114 appearances and playing a key part in their run to the 2019 Champions League final.

He was also a crucial member of the England side who secured the country's first major final appearance for 55 years at this summer's European Championship.

Bellerin, meanwhile, is reportedly so desperate to leave Arsenal that he is ready to take a huge pay cut to make it happen.

The ex-Barca youth player has made his feelings clear to Arteta and technical director Edu, yet he feels both are blocking his departure.