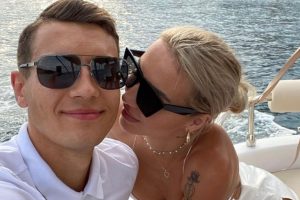 The Twerk Queen WAG of new Arsenal signing Jakub Kiwior says she is ready for London with a glam Instagram selfie having been inundated with messages from fans.

Known online as Claudia Redheaded, the former Germany Twerk Competition champion has 55,000 followers and hasn't been able to reply to all the messages of goodwill since his move from Spezia was confirmed this week.

Claudia, who regularly shares videos of her and her Twerk squad performing new routines, has unsurprisingly caught the eye of football fans after her partner's World Cup performances.

Now, while posting a glam mirror selfie online, the dancer thanked those who have entered her DMs and left comments on her snaps in recent days.

Claudia wrote: "Thank you all for your messages! I can't reply to everyone, but I really appreciate it! London I'm ready."

With 22-year-old central-defender Kiwior joining Arsenal in a £22million deal, Gunners supporters wasted little time in getting to know his other half.

Who is the most famous WAG in the Premier League? Give us your thoughts in the comments section below.

Kiwior also has nine caps for Poland to his name since making his debut last year, will now provide another left-footed option at the back for Mikel Arteta.

Arteta told the club: "It’s great that Jakub is joining us. He’s a young versatile defender who has shown huge potential and qualities with Spezia in Serie A, and also at international level with Poland.

"Jakub is a player who will give us strength and quality to our defensive unit. We welcome Jakub and his family to Arsenal and look forward to working with him."

Sporting Director Edu added: "We’re delighted to have completed the signing of Jakub Kiwior. He’s a young talent who we’ve been monitoring for a while now.

"We are now all looking forward to working with Jakub and seeing his continued development with us. We welcome Jakub to Arsenal."