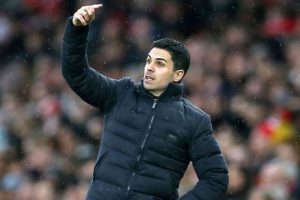 Arsenal will train at the Emirates Stadium on Saturday rather than their London Colney training base, according to reports. Arsenal have had their request for Sunday’s north London derby at Tottenham to be postponed accepted due to a lack of available players. The players Mikel Arteta did have at his disposal are set to stay away from the training ground and instead meet at the Emirates.

Arsenal had just 12 first-team outfield players available, which led to the postponement of Sunday’s match.

Premier League rules state teams must have 14 players to fulfil a fixture – 13 outfielders and one goalkeeper.

Martin Odegaard is the only confirmed case of COVID-19 in the Gunners squad.

The Norway captain missed the first leg of the Carabao Cup semi-final against Liverpool on Thursday.

Odegaard would not have been out of isolation in time for Sunday’s match.

The Athletic claims Arsenal will continue to train even though the match will not go ahead.

But they will be at the Emirates rather than London Colney.

Arsenal would have been without Granit Xhaka due to suspension after his red card in midweek.

Thomas Partey, Mohamed Elneny, Nicolas Pepe and Pierre-Emerick Aubameyang are all at the Africa Cup of Nations.

Cedric Soares and Bukayo Saka both picked up injuries, with Calum Chambers and Kieran Tierney also said to be struggling.

Arsenal submitted an official request to have the match postponed on Friday night.

The Premier League held a meeting on Saturday morning but The Athletic says they did not want to make an announcement while another match in the top flight is taking place.

Manchester City played host to Chelsea in today’s lunchtime kick-off and the announcement was made shortly after full time in that game.

Arsenal’s request to have the match postponed has faced a lot of criticism from fans and pundits.

The Gunners allowed Ainsley Maitland-Niles and Folarin Balogun to leave the club on loan earlier this month, knowing full well they’d be short with four first-team stars at the Africa Cup of Nations.

“I honestly believe that all teams, not just in the Premier League but the EFL now must be made to play their fixtures,” Neville said.

“We can’t be calling fixtures off. If it was purely down to Covid and extraordinary circumstances where there were 10 or 15 players out [it would be acceptable].

“But, we’re now talking about teams in the last few weeks where there’s no doubt they’ve been calling games off whether they think they’ve got the best squad or best team to win a game.”