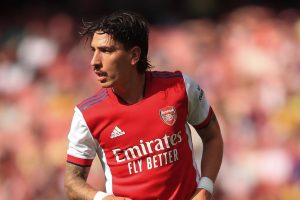 Arsenal have made yet another Hector Bellerin U-turn with Mikel Arteta having reportedly made a final decision on the right-back's future.

Bellerin has been linked with a move to Inter Milan, having dropped down the Gunners pecking order towards the end of last season.

And the right-back did his chances of first-team action no favours when he gifted Chelsea a goal in Arsenal's 2-1 friendly defeat on Sunday.

Under pressure from a Chelsea midfielder, Bellerin mistimed a pass right into the path of Blues striker Tammy Abraham – who gleefully fired home the winner at the Emirates.

And it looks as though the gaffe could be one of his last in a Gunners shirt, amid reports Arsenal are set to give into Inter's demands over the 26-year-old.

A move to the San Siro looked the most likely for Bellerin, but talks hit a bump when the Serie A giants were only willing to take him on loan.

With Arsenal wanting to recoup some cash for their own recruitment plans, it seemed that Bellerin was set to stay.

And The Guardian reported over the weekend that the Premier League club were in fact set to offer the defender a new deal.

But it appears the Gunners have performed yet another U-turn, with Sky Sport Italia claiming Arteta and transfer chief Edu are now prepared to let Bellerin leave on loan.

Should Arsenal let Bellerin leave on loan? Have your say in the comments below

The deal would include an option to buy, which would become an obligation for Inter to make the move permanent if certain conditions are met during the coming season.

Bellerin is not the only player whose fate appeared to take a twist on Sunday, with Arteta confirming after the game against Chelsea that Granit Xhaka would be staying, having been linked with a move to Roma.

But some fans reckon it's time to say goodbye to Bellerin following his clanger against Chelsea.

One supporter wrote on social media: "Seriously just give Bellerin away for free."

Another added: "In today's friendly, we got a friendly reminder why Xhaka can stay, but Bellerin absolutely cannot."

And a third person commented: "Hector Bellerin made this error for Chelsea to score. We should just sell this guy now."

Bellerin is one of Arsenal's longest serving players, having signed professional terms with the Gunners as a teenager back in 2013.

He has made more than 200 appearances for the north Londoners, helping them to win three FA Cups and finish second in the Premier League in 2016.