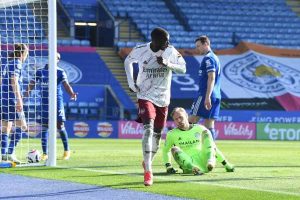 Happy anniversary, Brendan? It is safe to say the Leicester manager has known better. Brendan Rodgers brought up two years at the King Power Stadium on Friday, in the wake of his now familiar last-32 exit from the Europa League. His third year at the helm began with the most dispiriting of defeats, the damage compounded by the departure of Harvey Barnes on a stretcher.

An afternoon that began brilliantly for Leicester, who were gifted the opener by Granit Xhaka, finished horribly, with Barnes alongside James Maddison on an increasingly crowded treatment table, Rodgers’ team selection backfiring and Arsenal’s much-changed side cruising to their best result of the league campaign.

Mikel Arteta signalled a change in priorities by resting three of his first-choice front four – he may have wished he omitted the other, Emile Smith Rowe, when he limped off – but his understudies overwhelmed Leicester. Nicolas Pepe curtailed the hapless Luke Thomas’ outing. He, Willian and Alexandre Lacazette were all terrific; surprisingly so, in the case of the Brazilian, whose Gunners career had been a wretched affair. Theirs was an outstanding response to that early setback.

For Leicester, who lost their way in the final third of last season when a collapse cost them Champions League football, it raised the possibility history will repeat itself in unwanted fashion. They were unusually lax and seemed tired as they suffered a sixth home defeat of the campaign.

And yet it all started so well for them. Youri Tielemans drove a shot beyond Bernd Leno after surging forward unopposed. Arsenal had hampered their own cause, Xhaka coughing up possession.

But Arsenal reacted and fresher legs prevailed. Willian and Pepe started to exert an influence and show their energy. If the officials first frustrated the Ivorian, they then rewarded him. Arsenal were initially awarded a penalty when Wilfred Ndidi tripped Pepe; a VAR review later, they instead had a free kick, Michael Oliver ruling the offence took place outside the box. Leicester thought they had escaped when Ndidi’s raised hand blocked Pepe’s shot and referee Paul Tierney did not point to the spot. When Oliver suggested he watch it again on the pitchside monitor, he changed his mind. Lacazette duly sent Kasper Schmeichel the wrong way from 12 yards.

Before then, Arsenal scored an equaliser forged in Brazil. David Luiz escaped from Timothy Castagne to head in Willian’s free kick. It was a reminder that Leicester can flounder at set-pieces. It also stemmed from Pepe’s series of solo runs as he was fouled by Thomas. There was a lopsided look to Leicester, with two right-backs almost on top of each other while they left their teenage left-back Thomas isolated and exposed. Pepe troubled him. Oliver booked him. Rodgers substituted him.

Not that Ricardo Pereira, who switched flanks to take over on the left, stopped Pepe a few minutes into the second half as the visitors got their third goal. Arsenal’s record buy was the catalyst in a move and the finisher of it. After his driving run, the substitute Martin Odegaard found Willian and his low ball deflected off Tielemans to give Pepe a tap-in.

Then the result only felt part of the problem for Leicester. Barnes stretched for the ball, hurt his knee and the immediate sense was it could be serious. No one has scored more for Leicester in open play this season and, without him, few threatened Arsenal.

And when Jonny Evans went off as well, albeit in less worrying fashion, and Jamie Vardy inadvertently blocked team-mate Marc Albrighton’s shot  and Kelechi Iheanacho walloped an injury-time effort way over the bar, they were merely additions to the images of Leicester’s misery.