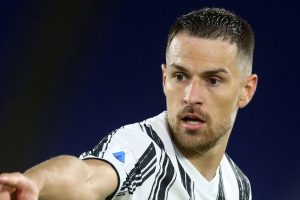 Juventus star Aaron Ramsey will return to Arsenal at some point in the future, says former Gunners midfielder Ray Parlour.

Ramsey, 30, made 369 appearances for the north London club before leaving to join Juve upon the expiry of his contract in July 2019.

He scored 64 goals in his 10-and-a-half-year spell at The Emirates, helping Arsenal clinch three FA Cups under Arsene Wenger.

The Wales midfielder has enjoyed at Juve, featuring 24 times in their Serie A winning campaign last term.

However, Ramsey has only been afforded nine league appearances in Turin this season after falling out of favour under Andrea Pirlo, with most of them coming off the bench.

And Parlour believes the ex-Arsenal hero, who has three-and-a-half years remaining on his Juve deal, will return to the club before he retires.

When asked if Ramsey could re-sign for the Gunners, he said on talkSPORT: “I’m not too sure. He’s doing well at Juventus at the moment and enjoying his football.

“He’s been a top professional his whole career, the way he conducted himself when he left Arsenal.

“He probably wanted to stay but at that moment in time they didn’t want to give him the wages he wanted.

“He was a brilliant player and I’m sure one day he will come back. He’ll probably finish his career in England – we don’t know where it’s gonna be.

“He could go back to Cardiff.”

Arsenal are on the hunt for a new creative midfielder in January, with Mesut Ozil set to finally depart the club and join Fenerbahce.

Mikel Arteta remains an admirer of Lyon playmaker Houssem Aouar, despite snubbing a move for the Frenchman in the previous window to seal a £45million deal for Thomas Partey.

Borussia Dortmund ace Julian Brandt has also been linked with a move to Arsenal and could be available for just £22.5million this month.

But despite reports suggesting Christian Eriksen and Isco were also on Arteta's radar, The Athletic's David Ornstein has revealed he has no interest in either player.