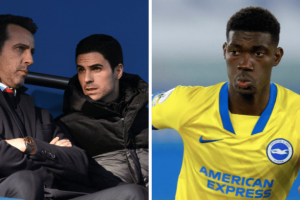 Arsenal are firmly in the race to sign Brighton star Yves Bissouma and have reportedly approached the midfielder’s agent to discuss a possible move to the Emirates.

Bissouma has had an outstanding start to the Premier League campaign and his eye-catching performances at the heart of Brighton’s midfield have not gone unnoticed among Europe’s top clubs, with a queue beginning to form for the 24-year-old.

Liverpool were thought to be in pole position for Bissouma’s signature but, according to Football.London, the Mali international would favour a switch to Arsenal if he were to leave the Seagulls for an English rival.

It’s believed the combative midfielder remains in close contact with Arsenal duo Nicolas Pepe and Gabriel Magalhaes, who he shared a dressing room with at Lille, and his representative Michael N’Cho has already held talks with the Gunners.

The report claims Bissouma is viewed as a perfect partner for Thomas Partey in the middle of the park, despite Arsenal having major ‘concerns’ about his apparent lack of discipline after five bookings and one red card for the Brighton this term.

However, Bissouma is unlikely to complete a switch to north London this January given Arsenal are currently prioritising a move for a more creative and attack-minded midfielder.

Speaking at an official fans’ forum last month, Arsenal technical director Edu admitted the club were crying out for a ‘player with creativity’ after an immensely disappointing start to the campaign.

‘It’s quite clear what we need,’ the Brazilian told supporters.

‘We need a player with creativity in the middle, we don’t have that in the squad right now.’

Arteta has made no secret of his desire to strengthen this winter and believes ‘the quicker you do the business the better’, with players needing to adapt to their new surroundings midway through the season.

‘For all managers, the quicker you do the business the better because it buys you time,’ the Spaniard said at a recent press conference.

‘Every player is going to need time to adapt. It’s about the qualities this player is bringing; what is the past of the player, has he been in a different country, has he played in the Premier League, does he speak the language, does he get familiar to certain styles of play?

‘There are a lot of conditions, in my opinion, that can affect whether a player can straightaway have an impact or not in a team.

‘For me, they are really key things to consider before making any steps to bring in anybody in January.’