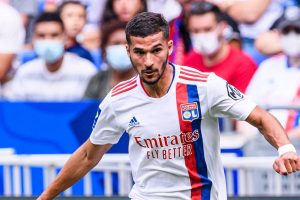 With less than one week remaining of the summer transfer window, Arsenal continue to be linked with a whole host of exciting new players.

Mikel Arteta might not be done yet as he continues to reshape his squad after a disastrous opening two games of the season which have seen Arsenal pick up zero points and fail to score a single goal.

Daily Star Sport are on hand with the latest transfer news from north London as the end of the transfer window approaches.

Arsenal's pursuit of Houssem Aouar has been given a timely boost with the news that Lyon would be willing to accept a loan deal for the sought-after midfielder.

The 23-year-old has been on Arteta's radar for some time, with the Gunners lodging a £23million bid for the star last summer only to see it firmly rejected.

At the time, Lyon were thought to be looking for around £55million, but because of the Covid-19 pandemic, the French side are now willing to accept significantly less.

The Ligue 1 club have been actively looking to sell Aouar this summer, but with no buyers forthcoming, they are now prepared to let him leave on loan.

That's according to French Football News, who claim that an obligation to buy will be included in any deal as Lyon look to reduce their wage bill.

What do you make of Arsenal's transfer business so far this summer? Let us know in the comments section.

Europe's elite have all been linked with a move for the 18-year-old, who provided four goal contributions in 14 La Liga appearances last season.

According to Spanish outlet Mundo Deportivo, Moriba was is in London for talks last weekend amid interest from north London rivals Arsenal and Tottenham.

The Gunners are no strangers to pinching Barcelona's top talent having signed Hector Bellerin and Cesc Fabregas from La Masia when they were teenagers.

It's no secret that Willian is on the brink of leaving Arsenal to join Corinthians.

The 33-year-old is in talks with the Brazilian giants – and football agent Kia Joorabchian, according to Globo Esporte, via Sport Witness, is a 'key' in figure in negotiations.

Joorabchian, who has been involved in some of the most high-profile football transfers, is working with Corinthians to try and facilitate the move.

"We’re looking forward to making this happen. For me it’s very important to help as much as possible,” Joorabchian told Globo Esporte.

It is believed that for a deal to take place, Arsenal would need to loan Willian and continue to pay some of his wages.