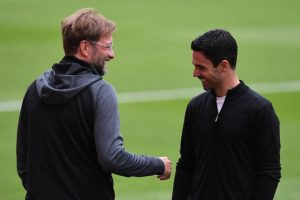 Arsenal have the chance to sign a player who was previously on Liverpool’s radar before Mohamed Salah was brought to Anfield, reports suggest.

The Gunners are eager to sign a new creative midfielder during the January transfer window, with Mesut Ozil edging closer to an exit.

Julian Brandt is said to be Arsenal’s top target in the winter window, having previously been watched by Liverpool before making the move to Borussia Dortmund.

The 24-year-old, who has only started six Bundesliga games this season, was left out of Dortmund’s most recent league game against Wolfsburg amid speculation he could depart this month.

And now, Dortmund chiefs have apparently decided he will be allowed to leave this window.

German outlet BILD claims Dortmund are open to bids for him and one other player, who they feel haven’t lived up to expectations at the Signal Iduna Park.

Brandt has only been at Dortmund since 2019, having signed from Bundesliga rivals Bayer Leverkusen.

During that time, he’s only scored eight times and provided 14 assists in 64 games, and it seems he could be edging towards an exit. Liverpool boss Jurgen Klopp is a keen admirer of the German playmaker, and was apparently eager to sign him when he was forming his squad at Anfield.

Klopp apparently viewed him as his ideal target, ahead of Mohamed Salah, who he ended up buying.

But the Liverpool recruitment team ended up changing the boss’ mind and convinced him that the Egyptian forward was the more suitable target.

Arsenal boss Mikel Arteta recently admitted the coronavirus pandemic has impacted the transfer market in various ways, and suggested big deals are unlikely for the Gunners.

"At the moment, the market is really complicated,” he said. "The situation around every club is not easy and to get negotiations going is harder because you cannot be face-to-face, you cannot travel to another country to make a deal happen like that.

"Everything has to be through the phone or Zoom. It can go either way. I can tell you what I would like and that's from day one to have the squad that I want and the players out and in, sorted.”