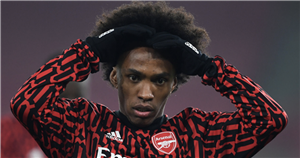 Arsenal manager Mikel Arteta may be forced to factor misfiring flop Willian into his plans next season after the Brazilian has failed to drum up interest following his uninspired first campaign.

The Brazil international joined the Gunners on a free transfer from London rivals Chelsea last summer and became one of the club’s best-paid players on a wage of £200,000 a week.

His first campaign at the Emirates Stadium included a return of seven assists in 37 appearances for Arsenal, although fans might have expected a greater return than a singular goal in that time.

And TuttoMercatoWeb has reported Willian, 32, could become a ‘prisoner’ at the club due to a lack of transfer interest in his services this summer.

The South American’s contract in north London is due to keep him at the Emirates until June 2023, at which point he’ll be approaching his 35th birthday.

It’s understood Willian’s reason for leaving Chelsea last summer was because they would only offer him a two-year extension, while the Gunners were happy to plump for a three-year deal.

It took the winger until May—in what turned out to be his final Premier League appearance of the season—to finally break his Arsenal goal drought nine months after joining the club.

Do you think Willian will still be an Arsenal player at the end of the transfer window? Let us know in the comments section.

Arteta has a host of other talented wingers at his disposal, including academy graduate Bukayo Saka and another Brazilian, Gabriel Martinelli, who cost just £6million when he joined from Ituano in 2019.

Those around the Emirates can only hope Willian has a similar resurgence in his second term, though his chances weren’t helped after he returned for pre-season looking overweight.

Willian’s initial signing wasn’t well-received considering it was announced around the same time Arsenal confirmed they were making 55 staff redundant in response to the Covid-19 pandemic.

The current predicament will remind supporters of the ordeal that saw Mesut Ozil locked into an extremely expensive contract for several years despite making very little on-field impact.

Ozil had the benefit of at least making a big contribution at the Emirates during some of his prime years, whereas Willian faces a fight to prevent himself going down as one of the club’s worst-value signings.