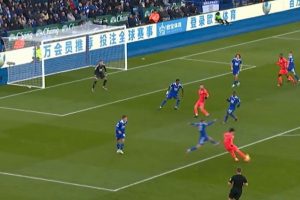 Arsenal fans have joked they signed the wrong winger from Brighton Leandro Trossard put pen to paper earlier this week.

The Gunners signed the Belgian winger earlier this week after an apparent falling out between the 28-year-old and Brighton boss Roberto De Zerbi. Despite the transfer, which could rise to £27m, Arsenal fans are now claiming they should have signed his teammate.

Following Trossard's omission from the Brighton team in recent weeks before his hasty departure, Kaoru Mitoma has come into the side and has been playing out of his skin. The Japanese international has slotted into the side and made an instant impact, arguably more than his Belgian counterpart.

Taking to Twitter, @TheArsenalTom tweeted: "I would very much like to see Mitoma at the carpet next season. He seems to get better every game. Sharp, pacey, incredible work rate. A very Arteta signing."

Do you think Trossard will be a success for Arsenal? Let us know in the comments section below

The comments came after Mitoma scored a beauty after cutting in from the left in Brighton's 2-2 draw against Leicester City in the Premier League on Saturday.

Brighton currently sit sixth after 19 games played as they look to push on and qualify for Europe ahead of the likes of Chelsea and Liverpool who both sit below them in the table.

Arsenal are looking to win their first Premier League title in almost two decades as they bolster their ranks with Trossard, although if their fan base is anything to go off they might be looking to sign Mitoma before the transfer window slams shut.

Mitoma raised eyebrows for his performances with Japan during the World Cup but his nation could only go as far as the round of 16 after beating Germany 2-1 on their way to the knockout stages.