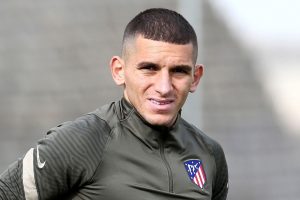 Arsenal have a decision to make regarding the future of Lucas Torreira as Fiorentina express an interest.

The Uruguayan midfielder moved to Atletico Madrid on loan in the summer but has been unable to nail down a regular spot.

Fiorentina are keen on bringing Torreira back to Serie A and are confident of getting the deal over the line.

Arsenal would need to recall the 24-year-old from Madrid but the Italian club fancy their chances of sealing the player's services, reports Italian newspaper  La Nazione.

Torreira joined the Gunners from Sampdoria back in 2018 when Unai Emery was in charge. He was initially a big hit at the Emirates having cost the club £26m and scored in the north London derby.

But once Emery was shown the door Torreira found opportunities hard to come by.

It has been a similar story this season with Diego Simeone only giving the player two starts in La Liga.

Torreira has a contract in north London until 2023, although Atletico are thought to have the option of making his move permanent.

The player may not have a route back in north London following the signing of Thomas Partey in the summer. Even before the Ghanaian arrived Torreira found himself some way down Mikel Arteta's pecking order.

And the player's father made his feelings known.

"Lucas is honest and wants to leave his soul on the pitch," he said.

"But that is defined by the coaches and for the current Arsenal manager he didn’t count.

"For a 24-year-old boy, recognised in Uruguay and around the world, the most necessary thing is to play."