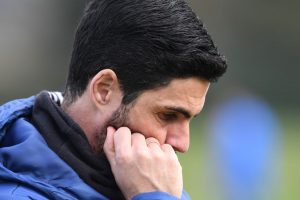 When the line-up for Arsenal's clash with Liverpool, fans on social media were quietly confident.

However, right from the off it was a decision which backfired as the Gunners fell to a humbling 3-0 defeat against the champions.

That was merely the latest edition of the biggest conundrum that has faced Arteta since replacing Unai Emery in 2019.

The Telegraph report that the trio are close off the pitch, with Aubameyang and Lacazette clicking from the moment the former arrived in 2018.

But on the pitch, it’s a different story, with Arsenal’s and their own individual best performances coming when that much vaunted front-three is fragmented.

Aubameyang has been shifted from left to centre on a seemingly weekly basis, as he endures his most difficult season in European football.

In fact, his last six goals have all came when Lacazette has been out of the XI, while the Frenchman has his last four when his best bud has been on the sidelines. It’s a problem that has severely hampered their first full campaign under Arteta and one that threatened to detail his tenure completely, until the emergence of Emile Smith Rowe in December.

That gave some temporary respite, with Bukayo Saka also providing a more reliable output than his expensive teammates.

Arteta is aware of the gravity of the issue and believes there are several reason behind their lack of cohesion.

“One of them is because we have had so many injuries and Covid,” said the Arsenal manager. “We have had a lot of things happening with competitions: we have had to alternate and still be competitive.

“Sometimes it is because of the qualities we have around the team, and that cohesion that the team needs. Sometimes we believe it is better to do it in a different way.”

One different way is to finally decide on the skipper’s best position, for all of Lacazette’s good work, Aubameyang appears to be a more long term fixture and they need to get the best out of him.

Gunners legend Emmanuel Petit has also urged Arteta to make a decision and stick with it, with the constant changes doing nothing for his confidence.

“For me, Pierre-Emerick Aubameyang is a striker, so he should play up-front,” Petit said.

“Yes, his speed means he can do a good job playing from the left-hand side. But this guy has to stay very close to the opponent’s box, not out wide where he has to get back and defend.

“He’s scored so many goals throughout his career, but when you lose that little bit of confidence, you’re not the same player and I think that’s what we’re seeing from Aubameyang at the moment.”

Either way, with a combined value of £175million, Arteta needs to find the answers and fast.

READ MORE: Inside story of Haaland's rise from clumsy teen to Europe's most wanted

READ MORE: Real fear for Joshua vs Fury summer fight as clock runs down on deal