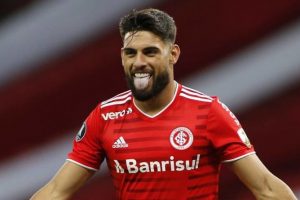 Arsenal are interested in signing Brazilian striker Yuri Alberto in the summer transfer window, according to reports. The Gunners are set to undergo a squad overhaul in the off-season and have reportedly identified Alberto as one of their targets.

Manager Mikel Arteta and technical director Edu are leading a major effort this summer, with Arsenal expected to be busy when the transfer window opens for 12 weeks on Wednesday.

The north London club reportedly want to bring in as many as five new players in a bid to improve upon a disappointing eighth-place finish in the Premier League.

With no European football to attract top names, the Gunners might need to be a bit more inventive in the transfer market.

Alberto would fit that description, with the 20-year-old striker perhaps going under the radar playing for Internacional in his native Brazil.

The Brazil Under-23 international has scored 17 goals and registered two assists in 49 matches for the club based in Porto Alegre and Brazilian outlet Globo Esporte reports that Arsenal have renewed their interest in a transfer.

JUST IN: How Man Utd could line up with 5 signings after Glazer transfer pledge 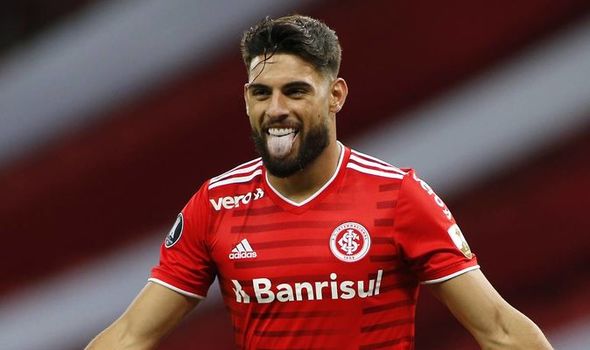 The Gunners reportedly tried to sign him in from Santos in 2017 when he was just 17 years old, but failed in their efforts.

Alberto still has four years left to run on his contract with Internacional, who want around £11m (€13m) for the striker.

Importantly, given the new Brexit rules, Alberto reportedly holds a European passport meaning he would not have to earn a work permit.

Arsenal are not the only European side interested, however, with Barcelona also aware of Alberto and reportedly considering an approach to Internacional.

Barcelona have already completed the signing of Sergio Aguero on a free transfer from Manchester City, but want another forward to add to Ronald Koeman’s side.

Martin Braithwaite is not considered up to the standard required and Barca have also been linked with a move for Villarreal’s Gerard Moreno this summer.

Arsenal are on the lookout for strikers, with plenty of uncertainty surrounding their current crop of players.

Alexandre Lacazette and Eddie Nketiah are both about to enter the final year of their contracts with the Gunners and have been linked with moves away from the Emirates.

Interestingly, Pierre-Emerick Aubamayang has also been discussed for a potential departure, with Chelsea in the market for a striker.

According to The Telegraph, the 31-year-old striker could be a contender for the Blues, if they don’t land Borussia Dortmund’s Erling Haaland, Inter Milan’s Romelu Lukaku or Tottenham’s Harry Kane.