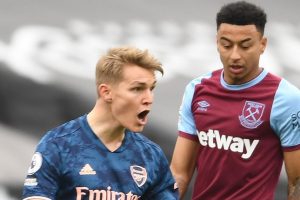 Arsenal will turn to former Liverpool target Nabil Fekir if they are unable to sign Martin Odegaard on a permanent deal.

Odegaard joined the Gunners on loan from Real Madrid in January and has impressed in his short time at the Emirates.

The Norwegian starlet has scored twice in 12 appearances in all competitions, earning praise for his creativity in midfield.

Mike Arteta is understood to be keen to bring Odegaard to the Emirates on a permanent basis, but there is no option to buy in the player's loan contract.

It is likely that Arsenal will have to stump up around £50m to sign Odegaard in the summer – a figure which could rise if he continues to impress.

Another season-long loan could be an option, but the Gunners appear more likely to turn their attention to former Liverpool target Nabil Fekir, according to Goal.

Fekir, who almost moved to Anfield in 2019 only for the deal to collapse, has two years remaining on his deal at Real Betis and has a release clause of £77m.

That figure is beyond what Arsenal would be willing to pay, but the good news for Gunners fans is that Betis will entertain offers well below Fekir's buy-out clause.

The La Liga club are struggling with the financial impact of Covid-19 and will look to balance the books by letting a number of players leave for cut-price fees.

Betis look set to demand around £26m for Fekir, who also has 25 caps for France.

The 27-year-old has shone since swapping Ligue 1 for La Liga in 2019, scoring 10 goals and contributing 13 assists in 63 matches for Real Betis.

The stats from his time at Lyon are even more impressive. The midfielder scored 69 goals and provided 46 assists in six season with the French club.