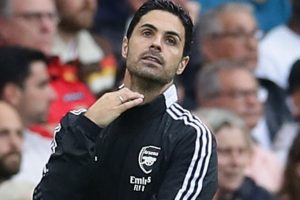 Mikel Arteta retains the support of Arsenal chiefs despite their alarming start to the new Premier League season.

The Gunners are already in crisis mode after losing their first two matches of the 2021/22 campaign, opening their account with back to back 2-0 defeats against London rivals Brentford and Chelsea.

Angry supporters are calling for Arteta to be relieved of his duties in north London, with some even surrounding the Spaniard's car to hurl abuse at him as he drove away from the Emirates on Sunday.

However, The Mirror claim Arsenal still believe he is the right man to take the club forward in spite of their poor start.

Gunners officials have already forked out close to £140million to back Arteta in the summer transfer window and are plotting further moves before next week's deadline.

Hector Bellerin is likely to depart the Emirates amid his desire for a new challenge, meaning Arsenal have began searching for a replacement right-back.

Lucas Torreira is also closing in a switch to Fiorentina, while Eddie Nketiah is attracting interest from Crystal Palace and Sead Kolasinac is expected to leave.

Rennes wonderkid Eduardo Camavinga, who has been linked with a move to Arsenal over the summer, is reportedly available for just £30million this summer, meaning the Gunners could launch a late bid to sign him. Despite already bolstering his squad with £140million worth of new talent, Arteta appears in need of further reinforcements before the transfer window draws to a close.

The Arsenal boss is well aware that his side find themselves in a "difficult and unprecedented situation", saying after Sunday's defeat against Chelsea: "I don't think the club in their history have faced something like this.

"We have to face the challenge. The league or table is not decided in August.

"The worst thing you can do is throw in the towel. We certainly are not going to do that."