Arsenal could beat Barcelona to Raphinha transfer despite ‘full agreement’ 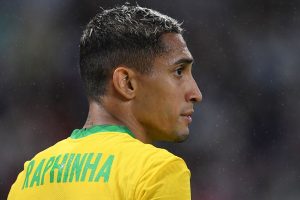 Barcelona must act fast or risk losing the race for Leeds star Raphinha, according to reports. Barca are claimed to have a full agreement with the player’s agent on personal terms but Arsenal could make their move if the La Liga giants cannot agree a fee with Leeds.

Raphinha’s 11 goals and three assists were vital to Jesse Marsch’s side avoiding relegation from the Premier League last season. But there has been constant speculation over his future since the January transfer window.

Bayern Munich were linked with a move for the Brazilian before Barca’s interest became apparent. Transfer expert Fabrizio Romano says there has been an agreement between Barca and Raphinha’s agent Deco over a five-year deal since February.

However, the Nou Camp club are yet to stump up the fee Leeds want. Romano says the Yorkshire-based club will not accept anything less than their £47.2million (€55m) asking price.

He claims Arsenal are one of the clubs to be back in the race for Raphinha so Barca will have to move fast to beat off competition. Romano tweeted: “Raphinha deal.

“Barcelona have full agreement with his agent Deco since February on a five year deal but Leeds want €55m, no plan to change their price tag. Barca need to be fast as Premier League clubs are back in the race, including Arsenal – but no bid submitted yet.”

Arsenal have made just one signing so far this summer, bringing in another Brazilian winger. Nineteen-year-old Marquinhos has joined for a fee of less than £3m.

They are set to announce the signing of Portuguese midfielder Fabio Vieira in the coming days, as well as USA goalkeeper Matt Turner. But former Arsenal star Jack Wilshere has backed the club to make a move for Raphinha.

He told talkSPORT: “For someone who’s only been in England for two years, he’s got a lot of experience. He came to England and just clicked straight away.

“He was in a relegation battle last year so he knows he’s up for a fight. I think he’d be a good one for Arsenal.

“It depends how long he has left on his contract. He’ll be expensive, of course he will.”

Arsenal will be hoping to get most of their summer business done before the start of the Premier League season. Mikel Arteta’s side visit Crystal Palace on August 5 in the opening match of the campaign.