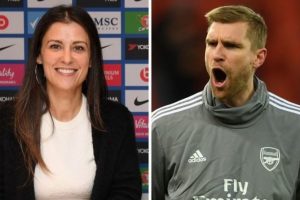 Arsenal have been revamping their whole business model over the past year and Per Mertesacker has played his own role in getting the club back on track. It’s been a frustrating period for the Gunners since Arsene Wenger’s departure.

Unai Emery’s spell as Wenger’s replacement was short-lived with the Gunners quickly moving to replace him with Mikel Arteta.

But the former Arsenal midfielder has only managed back-to-back eighth-placed finishes in his first two full campaigns as Arsenal boss.

Last year’s final position in the Premier League meant Arsenal would be heading into the new campaign without European football for the first time since 1995.

The club have seemingly accepted that they are in the midst of a rebuild though with a clear transfer strategy in place.

All six new arrivals this summer were under the age of 24 as Arsenal splashed out close to £150million on transfers.

David Luiz and Willian were also released, bringing the average age of Arsenal’s squad down significantly.

Folarin Balogun and Charlie Patino are just a handful of players expected to make the transition into first-team regulars in the near future.

Mertesacker has been key to pushing for a change in Arsenal’s policy since becoming academy manager in 2017.

According to Goal, the former Gunners defender has purposefully looked to ‘utilise the loan market’ to give more promising young players minutes in professional environments.

Together with Ben Knapper, it is suggested that Mertesacker are looking to copy the model currently in place at Chelsea.

“The shift in the way they operate means it is now very much about the transition [to senior football] for the players,” a club source told Goal.

“It’s about producing for the first team or to sell. That’s what the top clubs do. It’s something Arsenal have now realised, and Ben and Per are key to that.”

A number of young players have been signed in recent years and immediately sent out on loan.

Under Wenger, Arsenal would be more inclined to keep their promising youth players at the club to bed them in to the first team at an early age.

But Chelsea have proven in recent years that there is serious money to be made in the transfer market from loaning young players out.

Just this past summer, Chelsea cashed in on academy products Tammy Abraham and Fikayo Tomori for more than £60million.

And a host of players such as Billy Gilmour and Ethan Ampadu have been sent out on loan.

Arsenal took a similar approach this summer with Reiss Nelson, Dejan Iliev and William Saliba among those on Arsenal’s books who have joined other clubs on a temporary basis.

And it appears as though Mertesacker’s helped influence Arsenal’s new approach to the transfer market.