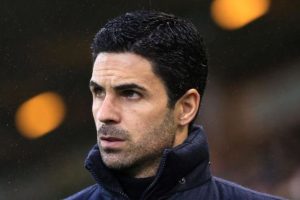 Arsenal manager Mikel Arteta has explained his ruthless decision to substitute Nuno Tavares in the first half against Nottingham Forest. The Gunners slumped to a humiliating 1-0 defeat at the City Ground, which saw them crash out of the FA Cup at the third round stage.

Arsenal failed to register a single shot on target against Forest, with Arteta’s under-strength side putting on a lacklustre display.

Forest mustered three shots on goal in response, and one of them proved crucial as Lewis Grabban finished off a sensational cross by Ryan Yates.

That sent the home crowd into raptures, and the volume only increased at the final whistle when the Tricky Trees confirmed their spot in the fourth round.

With Arsenal struggling as a whole, Tavares perhaps had the worst night on an individual level, being yanked from the action just after the half-an-hour mark.

The youngster was not injured, and Arteta simply opted for a like-for-like swap with Kieran Tierney taking his place at left-back.

Tavares threw his gloves to the ground in frustration after the Spaniard had given him an earful earlier in the game for his poor start.

After the final whistle, a disgruntled Arteta explained his decision to substitute the 21-year-old at such an early stage.

“It was a decision I had to make to improve the fortunes of the team, and that’s what I did,” he told ITV.

Nottingham Forest must now gear up for an exciting fourth round tie at home to Midlands rivals Leicester City.

Arsenal, meanwhile, will turn their attention briefly back towards their EFL Cup semi-final against Liverpool, with that competition representing their best chance of collecting silverware this campaign.

Arteta was coy when pressed on whether their poor performance against Forest was a sign that they needed fresh investment this month.

The Gunners have been heavily linked with strikers such as Dusan Vlahovic, although their list of arrivals remains empty thus far.

“They won, they scored a goal and we didn’t. We were not good enough and we have to apologise for it,” added Arteta.

“I don’t want to use excuses, I expect the team I put out to do better and when you don’t in the cup you are out.

“Today showed we were not capable of winning against Forest away from home and didn’t put in the level to win the game.

“It’s a collective issue and today we have not done it.”