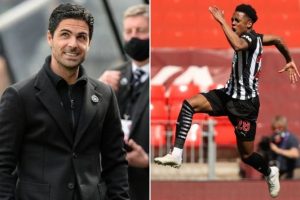 Mikel Arteta has provided an update on the future of loan star Joe Willock, who continues to shine for Newcastle United.

The 21-year-old joined the Magpies on a temporary deal in the January transfer window and has enjoyed an impressive spell so far at St James’ Park.

He has scored four goals in the Premier League in just 10 appearances for the club, including winning strikes against Southampton and West Ham United, whilst also netting dramatic equalisers against Tottenham and Liverpool.

That form has seen questions raised over his future. There have been calls for Newcastle to make his deal a permanent one, while Arteta has been encouraged to find a place for him in the Arsenal first-team next season.

The Spaniard has suggested that Willock will be given an opportunity to impress at the Emirates Stadium before any definitive call is made over where his future lies.

He said: “He has a chance. He is a player we really like so at the end of the season he will come back here and then we will make the decision again for what is best to move forward.” 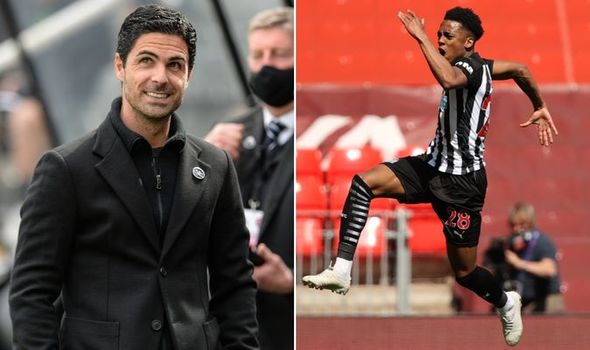 Despite having only afforded the midfielder 10 starts this season – with just two of those coming in the Premier League – the Gunners boss has admitted that Willock’s performances at St James’ Park are not a surprise and that he only needed game time to display his best form.

When asked if his displays in the North East have been a shock, Arteta said: “No, because he has got some great qualities, some unique qualities to play in that position.

“He is a real threat in the opponent’s box, physically he can do anything you ask for and has got the right mentality, is good technically and he is English.

“We knew all this but he needed game time, he needed to expose himself away from our environment and we believe as well that Newcastle, Steve and his staff is the right place for him to do that.”

Meanwhile, Newcastle boss Steve Bruce has reaffirmed his desire to sign Willock on a permanent deal beyond the conclusion of the 2020/21 campaign.

He said: “He’s got a big future. He’s the right type, the right profile – you’d love to build a team around a young player like Joe. If there’s a chance to bring him here next season, I’d love to get it done.”