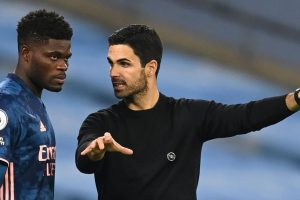 Arsenal boss Mikel Arteta admits the imminent return of Thomas Partey from injury will feel like a new signing for the club.

Partey joined the Gunners in a £45million switch from Atletico Madrid back in October, but due to injury he has only made a handful of appearances in his first three months at The Emirates.

The Ghanaian midfielder returned from a one-month spell on the sidelines in their north London derby defeat at Tottenham on December 6, only to hobble off after aggravating his thigh problem.

Now he is edging closer to another return from injury and could even be ready to feature in next week’s FA Cup third round clash with Newcastle.

And Arteta is looking forward to having Partey fit and firing again, branding his summer recruit “an enormous talent”.

When asked if his return will feel like having a new signing, the Arsenal manager said: “Absolutely. We are in January and I think he’s played two and a half games. That’s all and he was our main signing.

“So yeah. We’ve been missing him. He brings something different to the team, he’s a player with an enormous talent. But as well someone that can transform the team the way we want.

“It’s great if we can have him, keep him healthy and I think will contribute in a really positive way.”

Arteta then added: “Well, he hasn’t trained fully with us. But he’s done the most part training the last few days. He’s feeling good and we will assess him.

“He needs another two or three good sessions to see if he’s 100% ok to play. And if that’s the case, great news for us.”

Arsenal have turned a corner in recent weeks after suffering their worst start to a season for 46 years, with three wins in a row against Chelsea, Brighton and West Brom propelling them up to 11th in the Premier League table.

“When you are in a difficult moment the most important is to maintain the spirit and the belief that we will turn things around and belief of what we are trying to do,” Arteta said.

“And this week obviously it’s paying the price for the way that we have been going together through that period.”