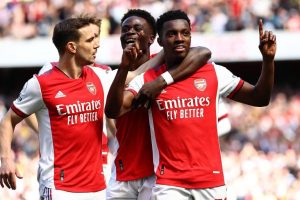 Arsenal moved a step closer to securing fourth place as their 2-1 defeat of Leeds United sent Jesse Marsch’s side into the relegation zone. Eddie Nketiah was the star of the show for the Gunners, netting two goals inside the first 10 minutes. Luke Ayling’s red card for a reckless two-footed tackle on Gabriel Martinelli in the 27th minute made things more comfortable for Mikel Arteta’s side, who were stunned when Diego Llorente netted from a corner midway through the second half with Leeds’ first shot of any kind. Arsenal reasserted their control to see out some late Leeds pressure, wrap up a fourth successive win and move four points clear of fifth-placed Spurs, as Leeds slipped to 18th place. Here are five things we learned from the game in north London.

After enduring a frustrating campaign for many months, Nketiah has finished the season like a train. The 22-year-old spent the majority of the season watching from the substitutes’ bench, but has timed his contributions perfectly after Pierre-Emerick Aubameyang’s departure and Alexandre Lacazette’s loss of form.

As things stand, Nketiah is out of contract with Arsenal on July 1. He has done everything in his power to force the club into action and offer him a decent deal. After scoring twice against Chelsea and starring off the ball against West Ham, he was at the forefront of Arsenal’s play once again against Leeds. Yes it was Illan Meslier’s shocking touch which handed him the first, but it was another example of Nketiah’s work-rate and hunger. His second owed much to Martinelli’s brilliant driving run, but Nketiah’s first-time finish was assured.

This was a huge game for Leeds, who have found themselves in the middle of a relegation fight. Their form has been pretty solid under Marsch, with their 4-0 thrashing by Man City last weekend ending a five-match unbeaten run. There was no sign of them bouncing back from the City defeat, though. They started terribly and never recovered.

While Meslier’s mistake was the most obvious example of poor play, it was Ayling’s red card which really underlined their mentality problem. With Liam Cooper missing through injury, Ayling became the most experienced player in the line-up. You wouldn’t have guessed it judging by his actions.

The right-back was obviously frustrated with his side’s terrible start, but that is no excuse for his dangerous tackle on Martinelli. It could have been even worse, had Raphinha’s idiocy in the scenes that followed been punished with a red card, rather than a yellow. The Brazilian was hooked in the 60th minute with a face of thunder.

JUST IN: Liverpool’s Van Dijk disagrees with Klopp after shots fired at Spurs

After Leeds’ shocking start to the game, Arsenal were not particularly tested for the first hour. The game resembled a training exercise for much of the time, but there was one player who continued playing at full speed.

Martinelli has long been considered the future of the Gunners’ attack, yet despite lots of flashes of talent, the 20-year-old is still to deliver. He has ample time and games like this act as a perfect reminder that the hype is backed up by reality.

The Brazilian was brilliant on the left of Arsenal’s attack, getting in behind the Leeds defence to set up Nketiah’s second goal with a perfect cut-back, and he didn’t stop there. Martinelli’s pace and direct running caused Leeds problems throughout and he was constantly involved, with most of Arsenal’s threat coming down the left flank.

Leeds had not managed a single shot until the 66th minute – and then they scored. The away supporters had been sarcastically cheering the winning of a corner, but they quickly turned into genuine cheers when Junior Firpo flicked on at the front post for Llorente to turn past a furious Aaron Ramsdale.

Arsenal had a proud record in defending corners until recently. They have now conceded twice from the set pieces in quick succession. It didn’t matter on this occasion but elite teams don’t make such basic errors. If Arteta wants to turn the Gunners into top four regulars then he needs to stamp out such lapses in concentration.

This was a seriously damaging defeat for Leeds, who dropped into the relegation zone following Everton’s clutch 2-1 win at Leicester City. They are level on points with Burnley, who mercifully lost 3-1 to Aston Villa on Saturday, but find themselves in the drop zone due to their vastly inferior goal difference.

Leeds have three more games in which to rectify their slump. They play Chelsea and Brighton at Elland Road next before finishing their campaign away to Brentford. Injuries have undoubtedly hampered them this season but they have what it takes to get themselves out of the trouble they find themselves in.