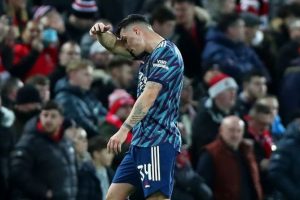 At a time when Arsenal needed experience, Granit Xhaka, former captain of the Gunners and the club’s most senior player, almost gifted Liverpool the first leg – and nearly threw away Arsenal’s only chance of silverware. Mikel Arteta’s game-plan, once again, dissipated beneath a red mist that is becoming far too familiar.

Diogo Jota scampered beyond the Gunners’ back four and chased a beautiful Andy Robertson ball down the field.

Xhaka, for reasons only known to him, desperately swiped his left leg towards the dropping ball, but booted Jota’s ribs out of his body instead of the ball.

Lying in the turf beside a writhing Jota, Xhaka turned to Michael Oliver almost mercifully, and gave him the puppy eyes. Unphased, Oliver instantly went to his back pocket and sent Xhaka for his second early shower of the season.

Partnered alongside the talented, but raw Albert Sambi-Lokonga, Xhaka was supposed to be the wise head that tempers the emotions and adrenaline young players often amass before tumultuous contests like this.

The fact that Xhaka’s red card proceeded a terrifying 20 minutes of self-inflicted danger for the Gunners who nearly put themselves two goals down.

Gabriel Magalhaes nearly lobbed his own goalkeeper with a comedic back-pass, and Aaron Ramsdale’s dithered clearance was chased down and blocked by a marauding Jordan Henderson.

How they survived an opening twenty minutes where Klopp’s men swarmed over them like army ants. But the Gunners’ dragged themselves back into the contest and pushed the Reds back with their excellent counter-attacking and intricate passing.

There was even enough ground to state that they had become the team in the ascendency, until Xhaka’s moment of madness.

Arteta’s side oozes talent, flair and excitement, but the lack of experience and composure within their side will hold them back from their aspirations.

Alexandre Lacazette spurred his young side on and led the line brilliantly considering the circumstances, but his days in north London appear very finite, with his contract set to expire at the end of the season.

Dusan Vlahovic may be the player at the top of Arteta’s wish-list, but the Fiorentina ace is not the experienced player to steady the ship when it is rocked by a red card.

He is a goal-scorer, and a good one at that, but if the players behind him are getting themselves stupidly sent off or thumping back-passes over Ramsdale’s head, then his presence at the head of Arsenal’s attack will be as useful as a hand-break on a canoe.

Diamonds are formed under pressure, and there is no reason why the young Belgian cannot blossom into a midfield jewel.

But without structure and with unnecessary insurmountable amounts of pressure, potential diamonds can also be squashed into dust.

But Premier League titles and Champions Leagues are not won through survival, and this habit of making things even more difficult for themselves is becoming a regular occurrence.

And if they keep piling the pressure on themselves with poor decision making, then their aspirations for the top four this season could be ground into dust.