Arsenal about to ‘amaze’ Rio Ferdinand with ‘creative’ signing 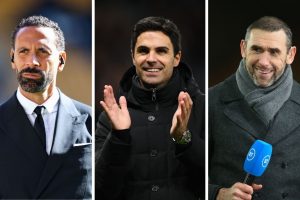 Leandro Trossard’s prospective January transfer to Arsenal has received a mixed reception among the fan base. But Rio Ferdinand and Martin Keown are bound to be encouraged by the move after previous comments about Trossard re-emerged.

Reports claim Arsenal are in advanced talks to sign the 28-year-old winger on a permanent deal this month.

Mikel Arteta looks set to bolster his attacking options ahead of the Gunners’ Premier League title challenge in the second half of the season.

Despite registering seven goals and three assists in 17 games this term, there has been a lack of heavyweight interest in Trossard.

Brighton and Hove Albion manager Roberto Di Zerbi has frozen him out as he’s forced an Amex Stadium exit, with Chelsea among the clubs linked in recent months.

But while he was regularly playing in November, Ferdinand claimed that he would be ‘amazed’ if the Blues didn’t sign him to boost their wing options this winter.

He told Vibe with FIVE: “This guy [Trossard] is doing major bits right now. If Potter doesn’t go back there to try and sign him, I’d be amazed.

“The best part of his game is being creative. He’s just scored a few goals lately, [but] that’s not even his game.

“I think the creativity and the approach play in his game are unreal. The only thing I was asking for before was a bit more end product, and he’s actually doing that now.”

But Keown is likely to be delighted with Arsenal’s pursuit after heaping praise on Trossard earlier this week.

The ex-Gunners defender labelled the Belgium international a ‘good egg’ and threw shade at Di Zerbi for picking a fight with the wrong player.

“Trossard is their top goalscorer. He played exceptionally well, and now he’s come out of the team,” Keown explained.

“But the relationship… if you don’t have a relationship and it goes wrong, then the players are going to take umbrage with you pretty quickly.

“So, I suggest he [Di Zerbi] starts to communicate. He has a great set of players to deal with already.

“They have already shown their quality, and Trossard is one of those. He is a good apple. He’s fighting a battle with the wrong player, for me. I think they need to get back together and get him back on the pitch.”