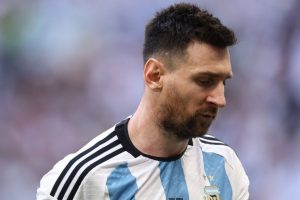 Argentinian media have laid into Lionel Messi and head coach Lionel Scaloni after a shock World Cup defeat against Saudi Arabia. Messi and co. are among the favourites to win the tournament but were dismal in their opening game.

A second-half comeback by the 51st-ranked Saudis helped secure an historic 2-1 win. Messi had opened the scoring before Argentina had three goals ruled out for offside in the first half.

Saleh Al Shehri and Salem Al Dawsari cancelled out Messi’s penalty in one of the World Cup’s biggest shocks.

Argentine media has now lamented Messi, boss Scaloni and the rest of the team after the defeat. Messi’s colleagues were toothless at the Lusail Stadium and ended a 36-match winning run.

Newspaper La Nacion took aim at Messi’s ‘broken spirit’ and wondered ‘what now?’ for their star player. They wrote that former West Ham defender Scaloni’s team selection was “wrapped in a sandstorm” and now the “horizon was clouded” as Argentina seek to qualify from Group C.

Website Ole bemoaned a “dream to a nightmare” – perhaps a play on Messi saying that he wanted his dream of winning a World Cup to become a reality in his final appearance at the tournament. In a separate piece, they wrote that the players had a “lack of reaction”, “lack of pressure” and a “lack of defensive solidity” throughout and that the damning result will “leave a mark for a long time”.

Messi reflected afterwards: “Now we have to show that we are a real group. There are no excuses. We have to correct what we have done wrong and try to get things done. I’m fine but disappointed with the result.”

The PSG forward had revealed before the tournament that this would be his last World Cup, saying: “This is a special moment, most likely my last World Cup. My last opportunity to make my dream, our dream, a reality.”

However, he seemed far from the ultra-fit player he promised fans would see in Qatar. The 35-year-old insisted he felt the fittest he has been for a while after an improved half-season in Ligue 1.

Messi told journalists ahead of the tournament: “I am feeling very well, I am very well. I think that I come here in great form both personally and physically. I have no issues whatsoever.

“I heard there were rumours about having to miss part of training, no, it’s just precautions. Nothing strange or out of the ordinary.

“We’re in the middle of the season and I feel well. Once we start playing a few more games, we will get pace and I have been playing recently. That’s what I’ve been trying to do recently up until the World Cup. I haven’t done anything different, I just took care of myself.”

Argentina ideally need wins from matches against Poland and Mexico to qualify for the first knockout round.