Argentina celebrated the 58th birthday of Diego Maradona on Wednesday by unveiling a bronze statue of the legend that recreates his goal against England that was voted the greatest of the 20th century.

Maradona’s birthday was October 30, but the unveiling was postponed a day due to rain. The statue is located near the Argentinos Juniors club stadium in Buenos Aires, where he made his career debut in 1976.

A decade later, Maradona captained Argentina to the 1986 World Cup title and scored two of the most memorable goals in the game’s history. 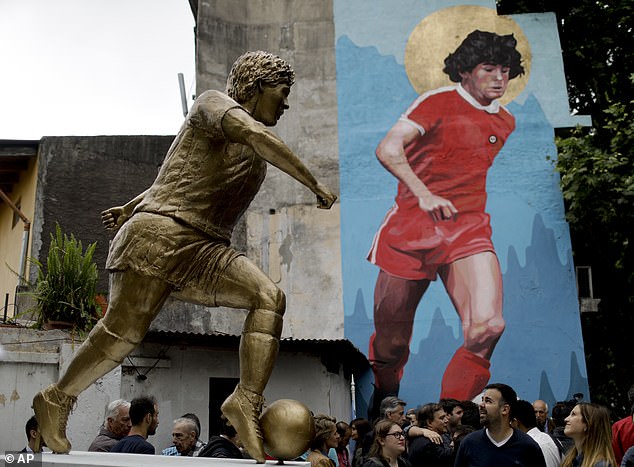 People stand by a statue of Diego Maradona during a presentation in Buenos Aires, Argentina 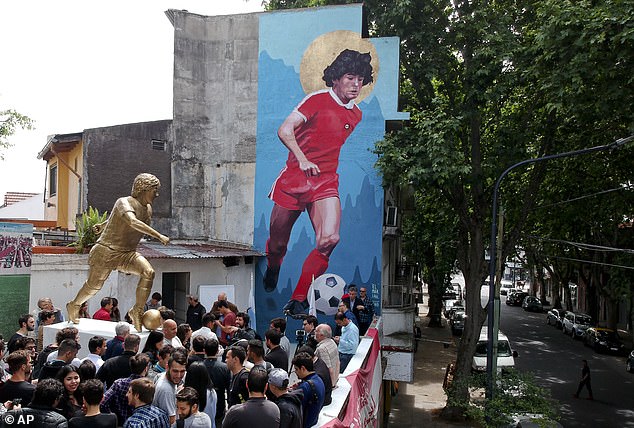 The 9-feet (2.8-meter) statue was placed in a terrace near a mural where Maradona is depicted

The first was the ‘Hand of God’ goal, in which the tiny Maradona jumped with England goalkeeper Peter Shilton and punched the ball into the net. The sleight of hand gave Argentina a 1-0 lead.

But the real magic came just minutes later when Maradona received the ball in his own half, ran through a pair of England players and sprinted toward the opposing goal. He then beat two more opponents, fought off another and faked Shilton before shooting the ball into the net.

Sculptor Jorge Martinez said that ‘goal that all Argentines shouted’ was the inspiration for his Maradona statue. 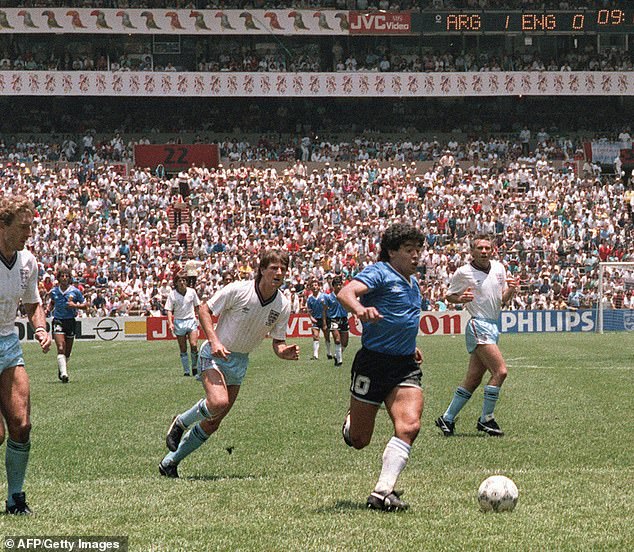 ‘It was a milestone for Argentina’s history,’ he said.

The 9-feet (2.8-meter) statue was placed in a terrace near a mural where Maradona is depicted wearing the red uniform of Argentinos Juniors. Maradona did not attend the unveiling ceremony. He has been coaching Mexican second-tier club Dorados de Sinaloa.

‘Sculptures are usually made for the dead, and Diego is alive,’ said Alberto Perez, who heads the historical committee of La Paternal, the small Buenos Aires neighborhood where the statue is located.

‘You need to pay homage when you’re alive and everyone should know that his neighborhood will always remember him.’