He’s turned Lautaro Martinez into a goal machine, is giving Juventus a run for their money and even has Romelu Lukaku scoring again… why Antonio Conte has been a huge hit in his first 100 days as Inter Milan manager

When Antonio Conte was appointed as Inter Milan manager he said he was ‘struck by the desire to bring the club back to where it belongs’.

Yesterday was his 100th day in the job and he certainly hasn’t disappointed so far, guiding Inter to the top of Serie A and mounting a serious challenge to the domestic dominance of Juventus.

A host of big names and expensive acquisitions followed him through the door at the San Siro but he has helped them to settle with ease, implementing his customary 3-5-2 style without any issues. 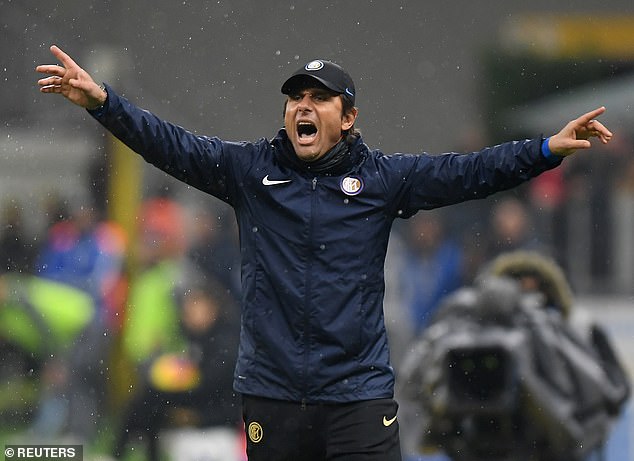 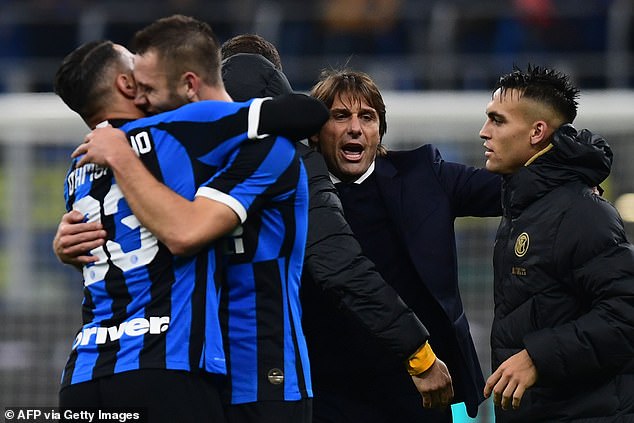 Conte was arguably the managerial coup of the summer. His reputation dipped slightly after his second season at Chelsea but his work in his first year in England and his time at Juventus had cemented his place as a top-tier manager.

So when the chance to take over one of Italy’s most illustrious clubs with an already strong squad and a board capable of further investment came up, it seemed like a match made in heaven.

After he took over, Conte spoke of the qualities he wanted from his players.

Mauro Icardi, Ivan Perisic and Radja Nainggolan didn’t fall into those sub categories so they were all shipped out.

Instead Conte injected quality into the spine of his side, bringing in veteran Diego Godin on a free and signing highly-regarded Serie A midfield duo Nicolo Barella and Stefano Sensi.

In came Romelu Lukaku for £72m and Alexis Sanchez on loan, both from Manchester United, but Conte’s real gem was already in place. 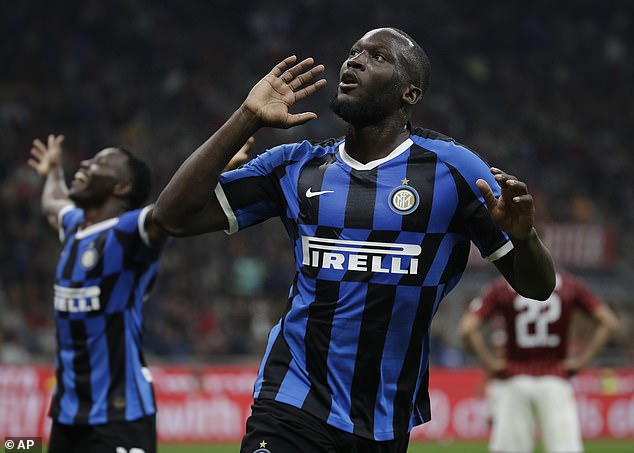 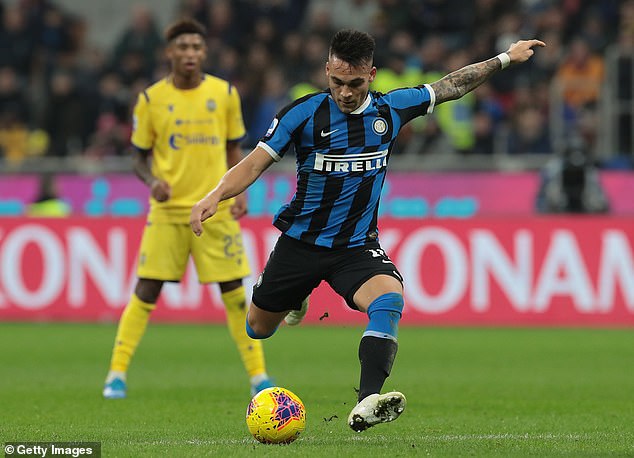 Lautaro Martinez arrived in Milan from his native Argentina in the summer of 2018 with a lot of hope that he could be the next South American star to make it big in Europe.

The early signs were worrying though. He scored just nine goals in 35 appearances last season and looked like he could be another misguided purchase. But this season he has come to the fore, scoring 13 times already.

Martinez has also forged a superb partnership with Lukaku, the man Conte wanted but couldn’t have at Chelsea. The Belgian was deemed surplus to requirements at Old Trafford, somehow, and United’s woes in front of goals have made the decision to let him go look even more bizarre.

Conte demands more from a striker than a typical manager. He wants someone who is capable of being a focal point at the sharp end of attacks but one who can also drop back and help progress play.

Lukaku is doing that perfectly and his relationship with Martinez has seen the pair work in tandem effortlessly. 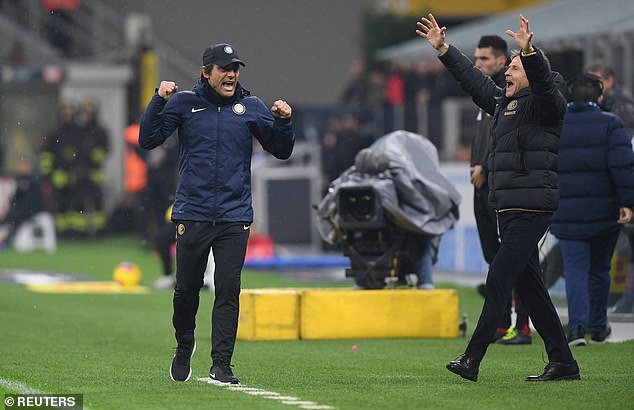 Conte has won 14 of his 19 matches in charge of the Italian giants, losing three games so far 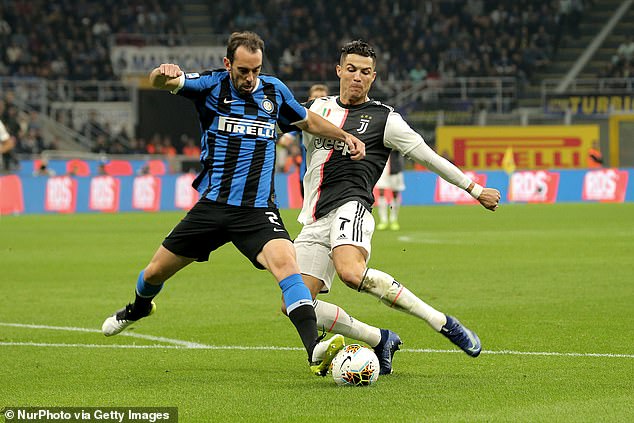 Conte has a reputation for leaving no stone unturned in match preparations and he is willing to ensure every facet of life is analysed so his players are able to perform at their best.

His players’ activity in the bedroom was one of the most recent areas he was willing to give instructions on, telling them: ‘During the season, relationships must not last too long, we must do as little effort as possible. So stay under the partner.’

Whatever is going on behind closed doors it seems to be working perfectly.

There is no denying that Conte’s teams are principally set up to be impenetrable but they have outscored Juventus by six goals and conceded just one more than their Turin rivals.

Their progress has not been without some hiccups though. After watching his side throw away a two-goal lead to lose 3-2 to Borussia Dortmund last month, Conte was seething with his players.

He suggested the club as a whole ‘got it badly wrong’ when planning out the season, his players lacked the strength of character and knowhow to deliver trophies, and that his squad depth was painfully thin. 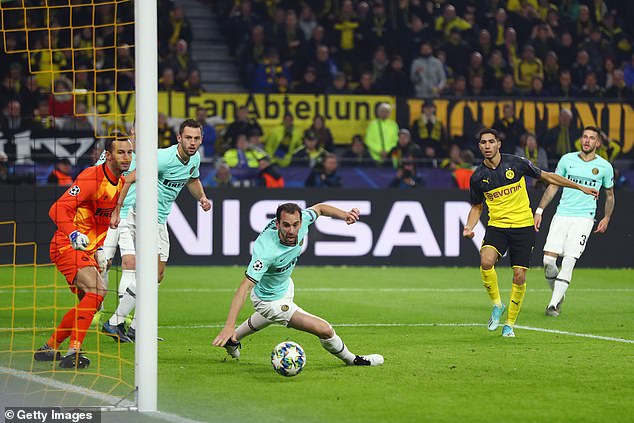 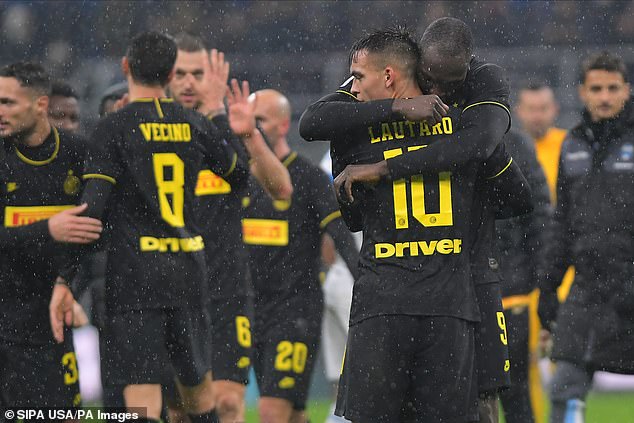 ‘Apart from Diego Godin, these players haven’t won anything and lack experience,’ Conte fumed. ‘We have too limited a squad to face both Serie A and Champions League football this season.

‘I mean limited in terms of numbers and quality. Some players have to be on the field constantly and in the long run, you do pay for that. I am furious because this cancels out the good work.’

But since that defeat in Dortmund, Inter have won four on the spin, leapfrogged Juventus at the top domestically and are in second place going into the final round of Champions League matches.

There is no time to relax though. Inter have a huge game against Barcelona to decide their European fate and take on Roma, Napoli and AC Milan before the middle of February. They then travel to Juventus at the start of March.

But if the first 100 days can be repeated over the course of the next few months then Conte is well on track in his quest to bring the glory days back to Inter.