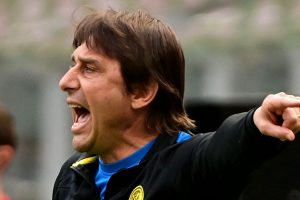 Antonio Conte wants to become Tottenham’s new manager – but chairman Daniel Levy might have other ideas.

The former Chelsea boss has been heavily linked with a return to London after leaving Serie A winnersInter Milan last week.

He is the odds-on favourite to fill the role which has been vacant ever since Jose Mourinho’s sacking in mid-April.

Conte, 51, is also high up on the shortlist at Everton after Carlo Ancelotti’s move to Real Madrid earlier in the week.

Despite Conte’s interest in the Spurs hotseat, The Sun understand Levy’s first choice remains ex-Lilywhites chief Mauricio Pochettino, who has reportedly held talks about a sensational return to north London. PSG do not want Pochettino to leave having only lured him to Parc des Princes in January of this year.

The French giants recently triggered a 12-month extension to keep him at the club until 2023 which will increase the amount of compensation Tottenham would need to pay if they want to re-hire their old manager.

That could lead them back to Conte, who was one of the main candidates sounded out by Levy after Mourinho’s exit in April. There are concerns that if Tottenham do hire Conte, he would demand a significant transfer budget this summer.

Though he is a serial winner, the wily Italian also likes to spend considerable sums to get his teams up to scratch.

Inter Milan now need to cut their cloth accordingly after over-spending to win this season’s Serie A title. Conte’s pragmatic approach would also seem to be at odds with Tottenham’s commitment to free-flowing attacking football.

The former Juventus boss often gets the job done, but his approach isn’t always the prettiest on the eye.