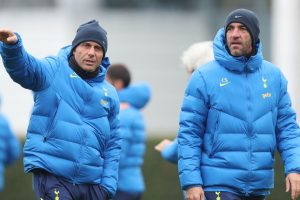 One of Antonio Conte’s first moves in the January transfer market will be to seek out two new defenders – and Eric Bailly is reportedly one of the names the Italian is looking at.

Spurs’ new boss is after a pair of centre-backs to bolster the backline following Cristian Romero's hamstring injury, with Manchester United’s centre-back being a priority.

Bailly has played just 225 minutes of action in all competitions this season, following behind the pecking order, with Harry Maguire, Raphael Varane, and Victor Lindelof all favored over the 27-year-old.

Journalist Duncan Castles – who recently broke the story via the Sunday Times about the Ole Gunnar Soskjaer’s sacking – spoke on The Transfer Window podcast, saying the Ivorian could be one of two centre-backs targeted by Conte.

During their 2-1 win at home to Leeds last weekend, it was Japhet Tanganga and Ben Davies who partnered with Eric Dier as part of a makeshift backline.

Bailly’s only Premier League action so far this campaign came when United faced off against Man City. During the game, he scored an own goal and the Citizens won the game 2-0.

He, however, might be hoping to prove himself under new boss Ralf Rangnick, who's just joined the side.

Can Eric Bailly reignite his career at Old Trafford? Let us know your thoughts in the comments section below.

The former Villarreal player was reportedly annoyed not to make the start against Leicester City.

Harry Maguire was instead opted in favour of Bailly, despite the England international not being fully fit.

Bailly joined United from Villarreal in 2016 for £34million – and owing to injuries and managerial shakeups, he’s played just 109 times in five years at the club.

His contract runs until the summer of 2024 – and reports so far suggest that either Spurs or Newcastle, with their newfound wealth, will be looking to pry him away from the side.#