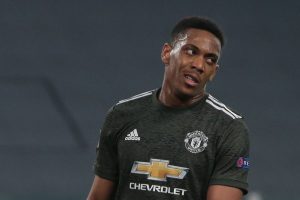 Anthony Martial has been urged to leave Manchester United for the sake of his career if he continues to be played as a central striker.

The Frenchman has struggled to really nail down his place as the focal point in United's attack this season despite largely having the backing of boss Ole Gunnar Solskjaer to make the role his own.

It appears his manager may be beginning to lose patience with the 25-year-old however, with Edinson Cavani getting a greater run in the side before his injury, while Marcus Rashford started there against Chelsea on Sunday.

Martial had to make do with a place among the substitutes as Daniel James and Mason Greenwood were preferred in his favoured role on the flanks.

And ex-Liverpool star John Barnes believes Martial must now weigh up his options.

"Anthony Martial has never been a centre forward, despite Manchester United playing him there," Barnes told BonusCodeBets .

"If he can't get a place in the starting team in his preferred wide position, following the emergence of Mason Greenwood, then maybe it is time for him to leave Manchester United.

"Lots of clubs nowadays have benches full of superstar players, who are happy to be there.

"But I don't know if Martial is one of those players, or what Manchester United's intentions are with him. I would suggest a change could be good for both him and the club if they aren't getting what they want from him playing there."

Get the latest Man Utd news straight into your inbox!

Manchester United are looking to plot their path back to the top.

And you can keep track of their journey by signing up for the brilliant new Mirror Football newsletter!

With their title Premier League title challenge in full flow, it remains to be seen if United can knock their rivals off their perch.

From the latest news to the agenda-setting stories, get it all in your email inbox.

Signing up is simple. Put your email at the top of this article or follow the instructions on this link.

Martial's form has been under the microscope of late, as he has only managed to find the net seven times in 32 matches this season.

United are now reportedly on the lookout for a new striker to sign in the summer which would severely hamper Martial's chances of regular action unless he is able to force his way back into the starting XI soon.

Solskjaer did eventually turn to Martial on Sunday, bringing him on for Greenwood but with just 11 minutes remaining.

His omission from the line-up had raised a few eyebrows before kick-off, but not those of Sky Sports pundits Graeme Souness and Roy Keane.

Should Martial leave Man Utd this summer? Have your say below.

"I'm not surprised you leave him out," Souness told Sky Sports. "I think he's a young man with talent to succeed at the highest level…but will he be disappointed he's not playing today?

"He's one of those players who's going to end up looking back at his career and thinking he could have done so much more. I'm a fan but I'm not a fan."

Former United skipper Keane was in agreement with Souness, adding: "Yeah he doesn't look like he loves the game. That's always a worry."