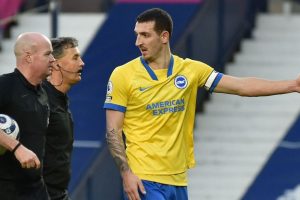 Brighton centre-back Lewis Dunk has slammed referee Lee Mason after he was controversially denied an equalising goal in his side's 1-0 defeat to West Brom.

After conceding an early goal the Seagulls won a free-kick just outside the box, and Dunk asked Mason if he could take it quickly.

Mason stepped away from the ball and appeared to indicate for Dunk to go ahead by blowing his whistle.

However he blew again just before Dunk's effort hit the back of the net, changing his mind and disallowing the goal.

After then changing his mind once more and allowing the goal to stand the decision went to VAR, and eventually it was definitively ruled out amid farcical scenes.

Speaking to Sky Sports at full-time Dunk was visibly livid, and could not conceal his anger with Mason's conduct.

"It's embarrassing," he raged. "It's a horrendous decision. I said to the ref 'can I take it?', he blew his whistle and I took it.

"Just because you've got so much pressure from the bench and the players, you cannot disallow the goal. VAR don't know what he said.

"I don't think he knew what he was doing. I don't know how VAR got involved because he said the words to go and take the free-kick."

When asked if he thinks Mason lost control of the game, Dunk replied: "I think you answered it there. Yeah he did. Fact."

Brighton also missed two penalties on a hugely frustrating afternoon for Graham Potter's team, and sit 16th in the table and just four points ahead of 18th placed Fulham having played a game more.