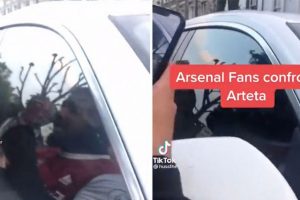 Mikel Arteta appeared to be harassed by Arsenal fans outside the Emirates Stadium following his side’s 2-0 defeat to Chelsea.

The Gunners suffered their second loss in as many games this season on Sunday as they were completely outclassed by Thomas Tuchel’s side in the Premier League London derby.

Romelu Lukaku bullied the Arsenal defence on his way to scoring on his return while Reece James tucked away the second, leaving the Emirates faithful frustrated and agitated.

And a video has now emerged in which several Arsenal fans appear to surround Arteta’s car before venting their anger directly at the Gunners boss.

With the Spaniard’s car stationery in traffic, one fan said: “Arteta, was that good enough? Please leave the club.”

Meanwhile, Arteta expressed his own disappointment in the post-match press conference, commending Chelsea’s performance but also identifying some positives from his own side.

He said: “It’s another defeat, the second one of the season which is really tough to take.

“Chelsea deserved to win, I think they were the better side overall. We had moments at the start of the first half and at the beginning of the second half.

Do you think Mikel Arteta will be sacked before Christmas? Let us know in the comments section.

“What I liked about the team is that at 2-0 they never gave up, they tried right up to 90 minutes. With our limitations, because at the moment we are missing eight or nine players.

“I’m sad, sad for the fans because we really wanted to give them something special today.

“Even though we know the circumstances we have with the team at the moment, and not being able to do that and enjoy this moment with them is sad.”

Arsenal’s disastrous start to the league campaign is expected to continue when they face Manchester City next Saturday.

A loss to last year’s champions would leave Arteta’s side without a single point and lead to further calls for his sacking.