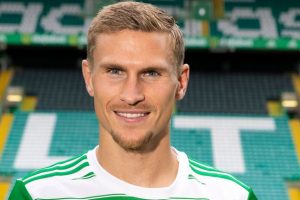 Celtic manager Ange Postecoglou believes the arrival of Carl Starfelt is a major lift for his squad following the club’s Champions League exit.

The 26-year-old Sweden defender has completed his period of quarantine following his move from Rubin Kazan and is set to make his debut against Hearts in Celtic’s Premiership opener on Saturday, live on Sky Sports.

Postecoglou named a back four with an average age of 21 for Wednesday’s 2-1 extra-time defeat by Midtjylland which consigned them to a 3-2 aggregate loss and a Europa League qualifier against Czech side Jablonec.

“I think it’s been a bit unfair the pressure I have exposed some of our younger defenders to so far, and they have done awfully well,” said Postecoglou on Friday.

“Callum McGregor has done an unbelievable job as a leader in these first few games. He has stood up both in attitude, performance, everything.

“But he needs help, he needs some other experienced heads and it’s good to get Carl here. I think it’s a boost for the whole squad.”

Postecoglou suggested after the midweek European exit that he may not have been forceful enough in his demands for new signings.

However, Nir Bitton is available for the domestic league season opener at Tynecastle after a European suspension but Leigh Griffiths will remain out.

“Even to get Nir Bitton back also helps because when you are starting off in these challenging circumstances, you rely on the experienced ones to be able to cope with whatever pressures are around,” Postecoglou added.

“I think it gives the whole squad a lift to see Carl here and I am looking forward to seeing him in action.

“Leigh is probably still two to three days of rehab away. The scan shows he has a little bit of an issue with his calf.”