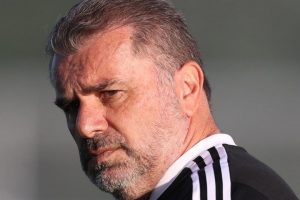 Ange Postecoglou admits Celtic will have to improve if they are to deliver him a win in his first competitive match in charge of the Glasgow giants on Wednesday morning.

Celtic will take losing form into their UEFA Champions League second qualifying round first-leg clash against Danish club Midtjylland at Celtic Park after being beaten 1-0 in a weekend friendly by English second-tier outfit Preston North End.

“It wasn’t a great game for us – we didn’t start well and lost a bit of belief,” the former Socceroos coach told Celtic TV.

“We struggled through the whole game … we could have been better.”

Postecoglou said while fatigue from a heavy pre-season schedule might have been an excuse, the performance wasn’t good enough.

“We’re building towards a good fitness level. (The match against Preston North End) maybe helped us a little bit towards that, but we needed more than that,” he said.

“Hopefully we’ll get a couple back for (the match against Midtjylland).

“It’s a very young group at the moment that we’re throwing out there. It’s no secret that we need to bring some players in and we’re working hard to do that.

Despite the defeat, recent Celtic signing Liam Shaw, who joined the club from Sheffield Wednesday, told The Glasgow Herald the squad was becoming accustomed to Postecoglou’s style of football.

“Every day in training, the manager is trying to get his style of play across to us,” Shaw said.

“He just wants us to play our football and not worry about any opposition no matter who they are. It could be Man U or anyone. We shouldn’t be bothered about who we are playing.

“It’s not going to come overnight obviously. It’s going to be hard but he likes that challenge. He wants us to adapt to his style. It’s a challenge for us as well but it’s good.

“We want to get up to his standards how he wants us to play football as quick as we can.”

“I look forward to continuing and building on the foundations Ange has laid to finish the season strong and achieve our goal,” Muscat said.

“I cannot wait to meet the players and staff, and get to work to achieve special things together.”