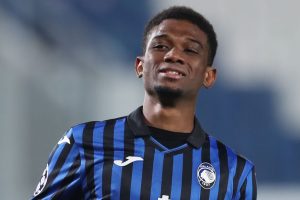 Amad Diallo’s long-awaited arrival at Manchester United moved another step closer, with the winger flying to Rome to complete paperwork.

However, due to work permit issues, the 18-year-old remained with the Serie A outfit for the first half of the season.

On Friday, Ole Gunnar Solskjaer revealed that his passport had arrived, ahead of his imminent Premier League move.

Atalanta have only used Diallo twice so far this season, but manager Gian Piero Gasperini revealed the club were hoping to keep him for the remainder of the campaign.

“There is an internal solution within the club that could be very interesting, even if the team is fine: it is Amad Diallo," Gasperini said earlier this week.

"It is clear that he is going to Manchester United, but he could still remain here for a few months with us.

"I like him a lot, he's only 18. I'd like him to stay until June, obviously it depends on his club."

Gasperini has now accepted defeat on that battle, with Diallo posting an image of a plane on his social media story.

Transfer expert Fabrizio Romano revealed the winger will now travel to the Italian capital, before making the final journey next week.

“Amad Diallo is now flying to Rome,” Romano posted. “He’ll complete paperworks and documents to join #mufc, then when everything will be completed [in the next few days] he’ll fly to Manchester.”

But that hasn’t stopped supporters on social media proclaiming their excitement at Diallo’s imminent arrival.

“Can't wait!!! This boy will light up the EPL,” a second predicted, while another said: “Best young winger debates will be put to bed.”

However, a more pessimistic fan suggested: “United will milk this as our January signing after buying him in summer!”