Charity? Not when Kevin Keegan’s sent off for hitting the wrong man! Leeds and Liverpool last played in a curtain-raiser in 1974… and all hell broke loose!

Liverpool v Leeds United is the fixture which leaps out from the opening weekend’s Premier League schedule, underlining how the Yorkshire club’s return enriches the narrative of the competition in so many ways.

The headlines that ensued when the sides last contested a curtain-raiser imply that there was never much love lost.

‘Footballers who throw their fists at each other are symbolically licensing violence,’ proclaimed the Daily Mail leader column a few days after the 1974 Charity Shield, which saw Liverpool’s Kevin Keegan and Leeds’ Billy Bremner sent off for fighting. 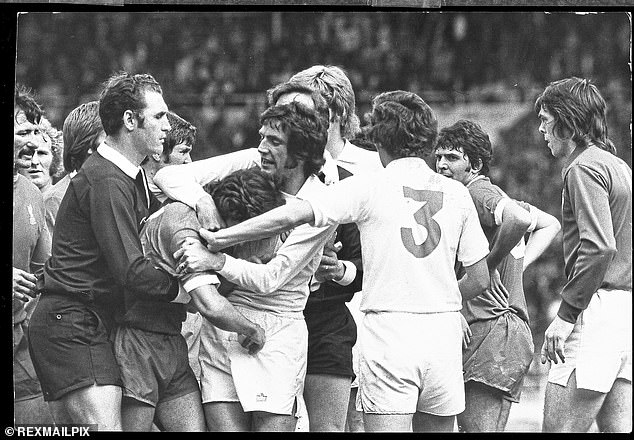 Keegan had always harboured doubts about Leeds. He had grown up in South Yorkshire, been a boyhood Leeds fan and idolised some of their players. But Norman Hunter ‘harpooned’ him, as he put it, in a testimonial game between Leeds and an England XI in 1975. Keegan was indignant. He had driven 300 miles to play in that game, the beneficiary of which was Hunter.

Keegan had moderate hopes for the Charity Shield between Don Revie’s side, who had beaten Liverpool to the First Division title by five points the previous season. He and the referee, former professional player Bob Matthewson, had played cricket together the week before, not far from Keegan’s mother’s house in Doncaster.

But Keegan was floored by the right fist of Johnny Giles after tripping him early in the game and when the same player — who had been merely booked by Matthewson — then barged him, Keegan and Billy Bremner traded punches and were dismissed.

Eddie Gray, a member of the Leeds side that lost on penalties that day, says Keegan punched the wrong man. ‘The first person Kevin saw when he got up was Billy and he thought Billy had put one on him,’ he said. ‘It was actually Johnny.’

Keegan also ripped off his shirt to reveal his torso as he marched off, an unusual act in those days. Oddly, Bremner decided to follow suit. That, as much as the punch-up, was deemed a scandal. 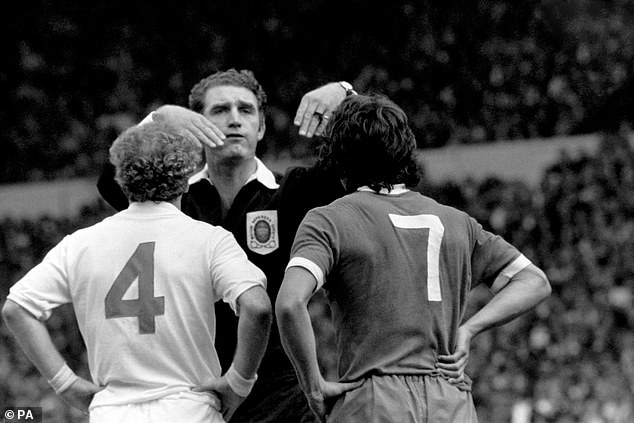 It was the first Charity Shield to be televised and the match took place against a backdrop of moral panic over hooliganism. The FA read the public mood and took no prisoners, with the chairman of the tribunal seeming to have a distaste for football. ‘You footballers are paid far too much money,’ he said. Keegan and Bremner were both banned for 11 matches.

Leeds had gone into the game under the cloud of Brian Clough’s arrival as Revie’s successor, with both Bremner and Giles passed over for the job, though Gray does not subscribe to the notion that it explained Giles’ conduct.

‘Those things happened back then,’ he says. ‘Liverpool games were also tense affairs. One thing led to another that day.’

Liverpool v Leeds was by no means as combustible a fixture as that clash suggested. There was actually a mutual respect going back to the mid-1960s, borne of Bill Shankly’s close friendship with Revie. When the two clubs were at their peak, Revie established a Sunday morning routine which entailed breakfast in bed, followed by an hour’s phone conversation with Shankly, discussing their respective fortunes the previous day.

Revie’s Scottish wife, Elsie, was the daughter of former Scotland wing half John Duncan — a contemporary of Shankly’s. That cemented the bond.

The two clubs had also made the same journey out of the wilderness — promoted from Division Two within two years of each other with managers who arrived at about the same time: Shankly in December 1959 and Revie in April 1961. 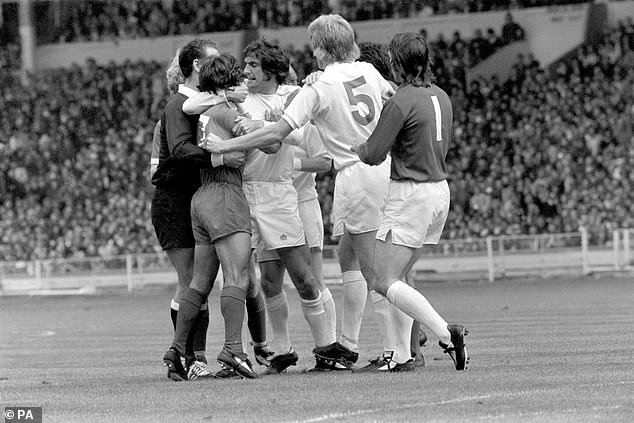 Keegan punched the wrong man, thinking Bremner rather than Johnny Giles had barged him

The truly visceral rivalry for both clubs was with Manchester United. Some feel the presence of Charlton brothers at both clubs — Bobby at Man United and Jack at Leeds — may have played a part, though both teams were simply intent on bringing Man United down a peg or two. There was good reason for Leeds/Liverpool relations to be hostile.

Not once in the 10 years from Leeds’ promotion to the top flight in 1964 did either they or Liverpool finish outside the top five. The two won the title twice apiece in that time and were comfortably the most consistent sides across the 10 years.

When Leeds played out a goalless draw at Anfield on April 28, 1969, to secure the title over Shankly’s side, scenes ensued which older fans of the Yorkshire side still speak of to this day.

In the dressing room before the match, Revie had told Bremner, his captain, that if the title were won, the players were to head over to the Kop. No one thought Revie could be remotely serious. ‘We thought Don had lost his marbles,’ relates Gray, who played on that windswept night. 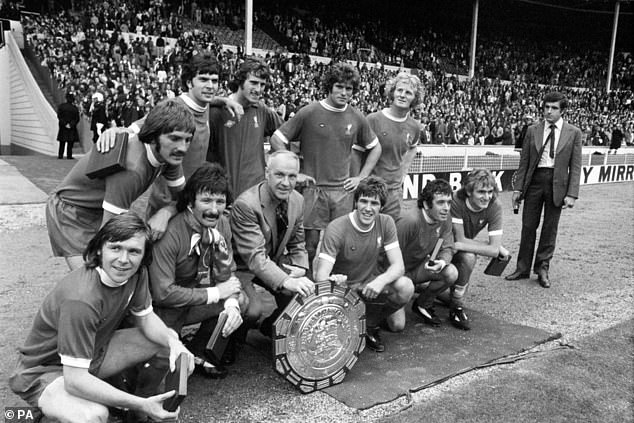 Jack Charlton always remembered an eerie silence as the players reached the legendary terrace, before an extraordinary chorus of ‘Champions, Champions’ rang out. ‘I don’t think it was something Shankly and Revie had concocted between them,’ says Gray. ‘I don’t think Shankly would have agreed to that.’

Shankly did materialise in the Leeds dressing room after the game and, after Revie called for quiet in the room, declared: ‘The best team drew tonight.’

Giles reflected in his autobiography that he and his team-mates had ‘a fair idea who the best team was in Shankly’s estimation’. But the Scot’s magnanimity and class were unmistakable.

Congratulatory telegrams poured into Elland Road the next day for perennial bridesmaids Leeds, who had been runners-up in each of the previous three seasons. Revie sent a telegram of his own, perhaps through one of the secretaries, addressed to ‘The Liverpool Kopp (sic), c/o Anfield’, thanking them for their good grace.

It was a mutual distaste for Manchester United which continued to draw the two clubs together in the ensuing years. Press reports of Leeds and Liverpool contesting the superb 1992 Charity Shield — which an Eric Cantona hat-trick secured for Leeds, 4-3 — are peppered with talk of both clubs’ smugness about Manchester United having been pipped to the title again. Liverpool’s 2-0 defeat of Sir Alex Ferguson’s side in the penultimate match effectively secured the crown for Howard Wilkinson’s Leeds the previous spring. 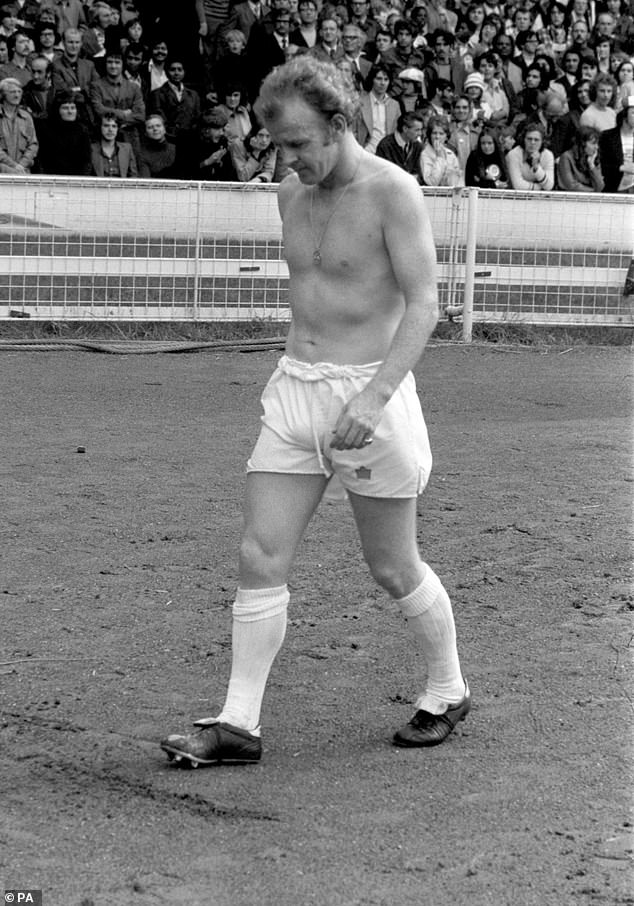 Keegan and Bremner both removed their shirts after being sent off, an unusual sight back then

It says a lot about the diverging fortunes of the two clubs in the ensuing decades that Leeds tended to buy Liverpool players like Ian Rush and Robbie Fowler who were past their best. They would be happy to add James Milner to that list, 18 years after he started his career at Elland Road.

The fixture has remained often full of flowing, open football. Leeds’ 4-3 win at Elland Road in 2000 with Mark Viduka scoring all four, lives long in the memory. Tony Yeboah’s peerless volley in the 1-0 win at Elland Road in August 1995 was one of the fixture’s greatest goals. Manchester United v Leeds United, by contrast, has tended to be a drab, attritional affair.

Marcelo Bielsa’s side will be as ambitious as ever when they travel to Anfield a week on Saturday, Gray insists. ‘It will be the champions of England against the champions of the Championship and Leeds will have great self-belief,’ he says. ‘Bielsa will play the game he wants to play. I don’t think he will go out to combat Liverpool. But I don’t think you can define our season on what happens there.’