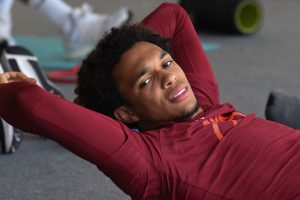 Trent Alexander-Arnold has signed a new deal at Liverpool – and more crucial contract extensions are anticipated at Anfield this year.

The 22-year-old right-back has been tied down on an improved deal.

England international Alexander-Arnold, who missed out on a place in the Euro 2020 squad following a late injury, is back fit now.

And he is now gearing up for the new season with Jurgen Klopp and his team-mates.

Alexander-Arnold's future is now secure until 2025, and he told the Reds' official website: “I'm honoured to be given the opportunity and to be shown the trust in the club to be given an extension, so it was a no-brainer for me.

“It's a proud moment for me – it always is – signing a new contract here. To be given the trust, like I said before, by the club and the staff is an amazing feeling.”

More new contracts at Anfield are expected to follow during 2021.

A host of key players have deals running until 2023, such as Mohamed Salah and Virgil van Dijk.

Liverpool won't want to end up in a situation where their top stars have their contracts have less than 12 months until they expire.

Less than two weeks ago, we reported how Salah was expected to receive a new deal this summer.

Van Dijk, meanwhile, recently turned 30 and spent most of last season out injured, but his importance to the team is unquestionable, so he will need a new contract soon too.