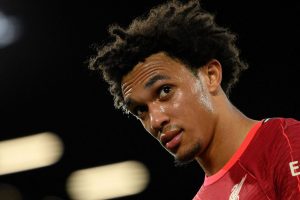 Alexander-Arnold, 22, provided his second assist of the season in the Reds' 3-0 win away at Leeds on Sunday, teeing up Mohamed Salah for their opener at Elland Road.

The young right-back has now recorded a total of 35 assists in just 133 Premier League appearances, which works out to one every 3.8 matches.

He has also drawn level with Neville in the all-time assist charts, which speaks volumes about how the role of a full-back has developed in recent years.

The former United right-back produced that return in almost 20 years at Old Trafford, racking up exactly 400 Premier League appearances for the club during that time.

But unlike in today's game, full-backs were not expected to bomb forward into the final third and make goal contributions as frequently during Neville's playing days.

Do you think Trent Alexander-Arnold is better than Gary Neville? Let us know in the comments section below.

While Sir Alex Ferguson mainly used him as one of four compact defenders in United's backline, Jurgen Klopp positions Alexander-Arnold so highly at times that he almost represents another midfielder for Liverpool.

The Reds academy graduate has thrived in that role, producing several pinpoint crosses for the likes of Roberto Firmino, Mohamed Salah and Sadio Mane to turn home in recent years.

Alexander-Arnold's passing ability is so impressive that it has even sparked debate over his position, with some calling for him to be used in midfield.

England boss Gareth Southgate carried out that experiment in their 4-0 win over Andorra last week, deploying him alongside Liverpool team-mate Jordan Henderson and Jude Bellingham in the middle of the park.

But Klopp doesn't understand why anyone would move him from his favoured position, saying last Friday: "Why would you make the best right-back in the world a midfielder? I struggle to understand how you can think that?