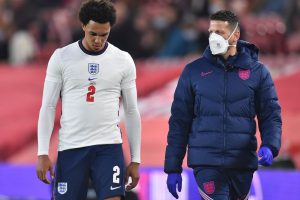 Liverpool star Trent Alexander-Arnold has said he is "absolutely gutted" after a thigh injury ruled him out of the Euros.

Alexander-Arnold limped off during England 's 1-0 win over Austria on Wednesday and manager Gareth Southgate admitted at the time that the injury could be "devastating" for the 22-year-old right-back.

Speaking to BBC Radio 5 Live immediately after the game, Southgate said: "It's not a good situation that he's had to walk off in some discomfort.

"We'll know more details in the next 24 to 48 hours. It looks like a thigh injury – in terms of the full extent, we don't know yet.

"It's devastating, he's worked hard to earn a spot here. I just hope it's not too serious."

"The Liverpool player sustained a thigh injury in the closing stages of Wednesday’s 1-0 win against Austria in Middlesbrough.

"A scan on Thursday confirmed he will be unable to play in the forthcoming tournament, so has withdrawn from the England squad to return to his club for rehabilitation."

Following the news that he will miss the Euros, Alexander-Arnold posted an image of himself leaving the pitch on Wednesday on social media, accompanied by the caption: "Absolutely gutted."

Southgate is set to name a replacement for Alexander-Arnold after England's final warm-up game against Romania on Sunday.

All six of the players that were cut have stayed with the squad for England's warm-up games and Lingard started the win over Austria.

Southgate said: "I gave them all the option if they didn’t want to stay with the group to go home, but they were all adamant [that they wanted to stay]."