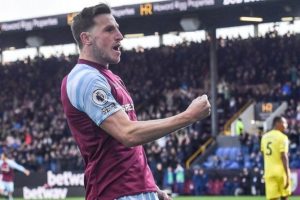 Newcastle legend Alan Shearer’s former comments on Burnley striker Chris Wood have resurfaced after it emerged that the Magpies had triggered a £20million release clause for the New Zealand international on Tuesday evening.

Wood, 30, has scored 49 Premier League goals for the Clarets since signing from Leeds for a joint club-record fee of £15m back in August 2017.

The former Leicester striker became a fan favourite at Turf Moor, notching up double figures in the league every season that he played in despite starring in a typically defensive outfit.

With just three in the league this season, it looked as though that run would come to an end if he were to stay the full season at the Clarets.

But an apparent £20m release clause meant that Newcastle chiefs saw fit to activate a deal that not only massively improves their front line, but significantly weakens relegation rivals Burnley’s chances of survival.

And Magpies hero Shearer gave Wood a glowing recommendation last year, with his comments sure to delight Newacastle fans as the player’s move to St James’ Park becomes all but a formality.

“I like him, I like what he does for the team and he is the focal point for them. He is very good at occupying two centre halves,” said Shearer.

“He is a get out for Burnley if they want because they are not afraid to knock it long.

“He can keep hold of it and bring other players into the game.

“He is horrible to play against and he won’t give defenders a moment’s peace.”

Burnley and Newcastle sit level on 11 points each, albeit Sean Dyche’s men have two games in hand and a better goal difference than Eddie Howe’s side.

Newcastle got their only win of the Premier League season so far against the Clarets, with Callum Wilson notching the goal to put them in front.

However, with the Englishman perennially injured, a second option is needed if the club are to accelerate ahead of the Turf Moor outfit in the survival race.

And with a glowing recommendation from Shearer – the Premier League’s all-time top scorer with 260 goals – Wood will have fire in his belly in a bid to ensure he is playing Premier League football next season.

He will likely make his debut in the crunch clash against Watford on Saturday, should he sign in time.