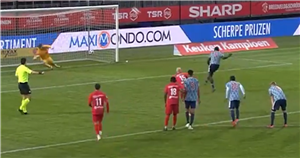 Ajax star Brian Brobbey produced the ‘worst penalty miss ever’ on Friday night when he blazed his spot-kick over the bar and out of the stadium.

The 19-year-old, who has featured 18 times for Ajax this season, was playing for the club’s reserve team, Jong Ajax, against Almere City.

Brobbey fancied his chances from the spot after his side were awarded a penalty in the 39th minute of the Dutch second division clash.

He stepped up purposefully but chose to go with power over placement and blazed the ball high over the bar and out of the stadium.

Brobbey, unable to believe what he had done, turned around with his head slumped and puffed out his cheeks.

Fans on Twitter were equally as shocked as Brobbey, with some labelling it the worse penalty miss of all-time.

“Nice man haha…that's going to Germany”, was the sarcastic reaction of one Dutch football supporter.

While another amused viewer added: “I think the ball is still flying in the air somewhere…Lol.”

“Brian Brobbey with probably the worst penalty I have ever seen in my life”, commented a third.

Brobbey’s miss proved costly as Jong Ajax went on to lose the contest 1-0, with John Yeboah scoring the winner in the 75th minute for Almere City.

The Dutch wonderkid won’t dwell too long on his miss, however, with the youngster set to join RB Leipzig in the summer.

He will link up with the Bundesliga club on a four-year deal after impressing in the Europa League and Eredivisie this term.

"RB Leipzig is a great club and is playing an amazing season”, Brobbey said, after confirming the move in March.

“The team is stable and gives off a strong feeling of unity. I’m looking forward to joining the team and of course want to play my part in helping the club be so successful."