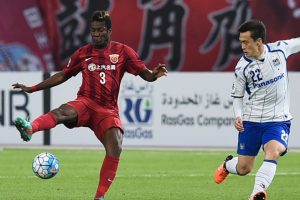 Three years after leaving Sunderland, Gyan joined Chinese Super League side Shanghai SIPG in the summer of 2015 for £8.1million.

He spent a total of two years with the club, although he spent the second year on loan in the United Arab Emirates, earning a total of £23.6million across this period.

This equated to just under £3million-per-goal after he managed to find the back of the net just eight times across his 26 appearances for the club. As well as earning £3million-per-goal while in China, Gyan's total earnings also would have allowed him to purchase the LA mansion that Mayweather bought in 2017.

Amongst its range of features, the mansion includes a private cinema that can seat up to 20 people and an open plan lounge which has a wine room attached.

In addition, the master bedroom comes with a walk-in wardrobe and a private balcony that overlooks the garden.

Is Asamoah Gyan the best Ghanaian footballer of all-time? Let us know in the comments section below. Former Ghana striker Gyan played at no fewer than seven AFCON tournaments during his international career, captaining the Black Stars at three of those.

He played in 31 matches across his seven tournaments, scoring eight goals, with his best finish coming in 2015 when Ghana were beaten finalists, losing on penalties to the Ivory Coast.

That was the only AFCON final Gyan played in, despite Ghana reaching the semi-finals in all but one of the tournaments he played in.

Gyan is also Ghana's all-time leading goalscorer and appearance maker with a total of 51 goals in his 107 international caps.

He was also a member of three World Cup squads, captaining the side in 2014, and was included in Ghana's 2004 Olympics squad aged just 18.