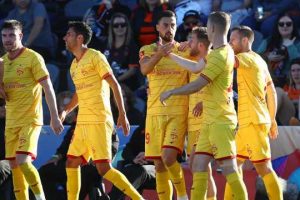 Adelaide United is a game away from potentially hosting a home grand final after knocking Brisbane Roar out of the championship race on Sunday.

Juric set Adelaide on its way when he scored his first in the 15th minute as Adelaide won an away final for the first time in history.

Juric chested the torpedo ball down, swivelled and drove the ball home from 15m in the 15th minute.

Another counter attack saw the Reds take a 2-0 lead. This time it was Ryan Kitto’s ball wide to Juric on the halfway line that caused Roar mayhem four minutes later.

Roar’s Alex Parsons pegged back the deficit when the half-time substitute leapt high to nod the ball past stranded Reds keeper James Delianov after a pin-point Corey Brown set piece 11 minutes after the break.

Adelaide survived a second half onslaught to beat Roar for the first time in 10 finals appearances at home.

An incredibly poor run of injuries again forced Adelaide coach Carl Veart’s hand before kick off which has become a common occurrence for the Reds.

Veart this time was to replace star Goodwin and hard running striker Kusini Yengi at the last minute.

The pair picked up injuries in Adelaide a day before the clash.

However, Veart’s side rose from a setback which could have had a profound impact on the Reds.

Kitto on the left wing complimented Adelaide’s game plan as he provided Juric much needed support during a superb Reds first half.

It gained control of the opening stanza but it seemed to run out of stamina in the second half as players such as captain Stefan Mauk and Juande braved injury pain before being replaced.

Juric’s first half performance should have attracted welcome attention from Socceroos coach Graham Arnold as the national team prepares for the next stage of the 2022 FIFA World Cup qualifiers.

After Veart described Juric as the best striker in the A-League when he had signed for Adelaide before the season started, his form had been blighted by injury as some of his performances incurred the wrath of many Adelaide fans.

Juric’s international fate is in his own hands. Now he has a chance to again impress Arnold if he scores against Sydney on Saturday.