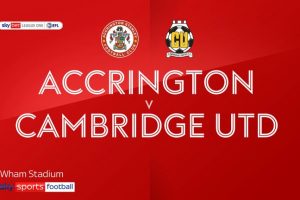 Two first-half goals gave Accrington their first League One win of the campaign with a 2-1 victory over newly-promoted Cambridge.

Matt Butcher and summer signing Harry Pell were the goal heroes as United, who drew in their opening game, rallied late on, only for Joe Ironside’s goal to not be enough.

Stanley started strongly and Dion Charles crashed his shot against the crossbar on four minutes.

Wes Hoolahan missed two decent chances for Cambridge before Stanley took the lead on 14 minutes. Sean McConville fed Butcher in the area and he rifled home his second goal in two league games.

United striker Harrison Dunk was clean through but he dragged his effort wide and it was two on 30 minutes.

McConville was again the provider with a ball from the left which Pell headed home.

Cambridge got back into it on 79 minutes when Ironside’s 18-yard strike squirmed under keeper James Trafford and rolled over the line.

Then it needed a superb save from Trafford to keep out Liam O’Neil at the near post as Cambridge threw everything at the Reds defence.