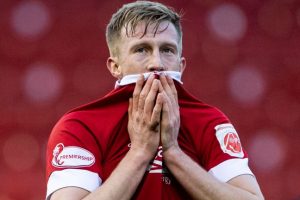 Match report as Aberdeen and Hamilton fail to find the back of the net; With Hibernian’s defeat to St Johnstone, Dons miss the chance to close the gap on third place; Hamilton add an important point in the board as they to avoid relegation from the Scottish Premiership Goal-shy Aberdeen passed up the opportunity to close the gap to third-placed Hibs in the Scottish Premiership with a goalless draw against Hamilton.

A toothless performance saw them share the points with an Accies side battling for their lives at the wrong end of the table.

Hamilton turned in a typically-scrappy display but the hosts will have been disappointed not to have offered more in an attacking sense.

After a cagey opening, the home side burst into life just before the midway point of the first half as Niall McGinn, through one-on-one with keeper Ryan Fulton, squared for Florian Kamberi. However, the former Hibernian forward took a poor touch and his effort was blocked, before McGinn’s follow-up was headed away by Accies captain Brian Easton.

Two minutes later Kamberi and McGinn combined again, with the latter pulling back for Callum Hendry, who contrived to blast over the bar from six yards.

The pressure continued as Lewis Ferguson’s pass saw him play a teasing ball towards Hendry but the on-loan St Johnstone man was unable to adjust and saw the ball squirt wide off his knee. 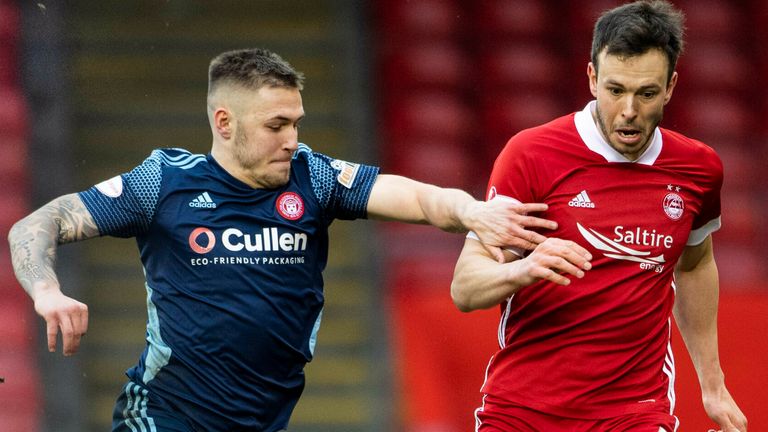 Hamilton survived that spell and could have gone in front themselves. First, Hendry’s loose pass set up a break which saw first David Moyo and then Lee Hodson have efforts blocked.

As the half drew to a close, Ash Taylor also gave up possession too easily, resulting in Ross Callachan lashing a shot from 30 yards which deflected off Taylor and required a spectacular diving save from Joe Lewis to turn it round the post.

The second half also started quietly in terms of goalmouth action, and it was just before the hour that McGinn, from a Jonny Hayes cross, saw an angled left-foot shot smothered by Fulton.

Hamilton had a decent claim for a penalty waved away by referee Bobby Madden on the hour mark. Scott Martin’s powerful strike was clearly blocked by the arm of Andy Considine, but the appeal was turned down. 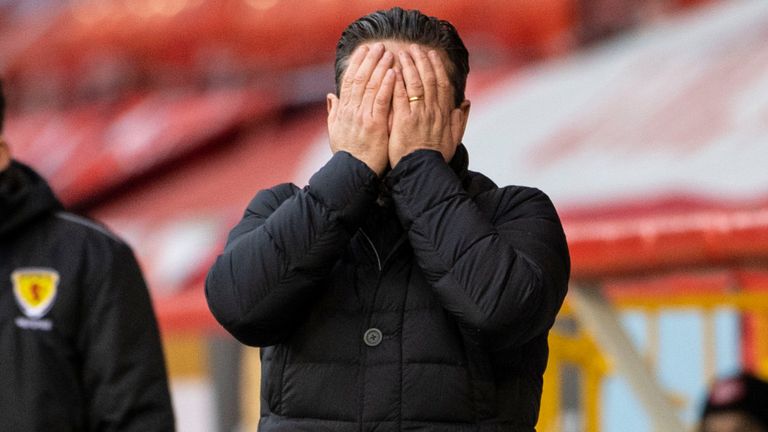 Considine could have given the Dons the lead just a few minutes later. Centre-back Taylor sent in a dangerous cross from the right which found Considine almost under the crossbar, but the Scotland international seemed to hook the ball away rather than over the line.

A slew of substitutions for both sides interrupted the flow of the game and saw Aberdeen throw more and more men forward, including an appearance for young striker Michael Ruth. Each successive Dons change felt more and more desperate, and would ultimately be to no avail.

Aberdeen manager Derek McInnes said: “The weight of responsibility usually falls on the strikers, but it shouldn’t just be on them. We all have to take responsibility. We have to try to rid the anxiety from the front players and hopefully it’ll turn.

“The number of clean sheets we have this season is fantastic, but the most important part to winning games is at the other end of the park we need to take responsibility for not taking the chances.

“We’re a point closer to Hibs, but we feel this is a real missed opportunity in terms of winning the game. We did a lot right to win this game so there’s an obvious frustration.”

“It’s a step in the right direction. It’s been a tough four days, and I’m delighted with my team’s performance. We had a tough game on Wednesday night against St Johnstone and lost a late goal to deny us victory. It was a bit demoralising for the lads having put so much into it.

“To travel up here and get that performance today speaks volumes about where we are as a club and as a team. The spirit they showed today was phenomenal. They went toe to toe with Aberdeen today.”

Aberdeen are away to Dundee United in the Scottish Premiership on Saturday March 20. Hamilton have two more games to come, playing away to Livingston next weekend before welcoming St Mirren on March 20.