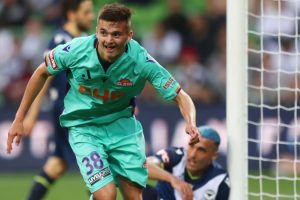 A stunning second-half strike by youngster Antonee Burke-Gilroy was enough to put Perth Glory on the way to their first win of the season and puncture 10-man Melbourne Victory’s unbeaten start to the campaign at AAMI Park on Sunday evening.

A second 15 minutes from time by teenage substitute Ciaran Bramwell put the Glory two up and left Victory with a mountain to climb, a summit they were not able to breach. 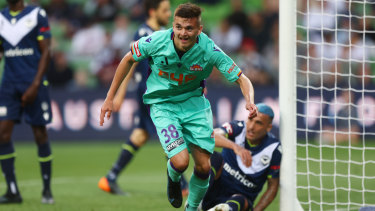 The Perth Glory’s Ciaran Bramwell celebrates a goal against the Melbourne Victory at AAMI Park.Credit:Getty Images

And ex-Melbourne City frontman Bruno Fornaroli rubbed salt into the hosts’ wounds three minutes from time when he lashed home a third from outside the penalty area to make the score 3-0.

In truth the hosts had been up against it from late in the first half when their Spanish midfielder Rai Marchan had been shown his marching orders after a high challenge on Glory defender Jonathan Aspropotamitis left the centre back bruised and bloodied.

Tony Popovic, the Victory boss, was forced into another reshuffle – his second of the game after defender Brendan Hamill had been forced to leave the pitch with an injury early in the first half, replaced by substitute Stefan Nigro.

Glory, seeking their first win of the campaign, sensed that they had a chance to make the numerical advantage count and began the second half with gusto.

The visitors hit the front in the 67th minute when Burke – Gilroy picked up a ball from a short corner, looked up and flashed a curling left foot drive past Ivan Kelava.

Seven minutes later they had doubled the advantage courtesy of Bramwell, who got on the end of cross from the right to head past Kelava before Fornaroli struck the third.

Victory had been top of the table before this game and were the only team with a 100 per cent record, having not conceded a goal prior. They now have to regroup, lick their wounds and recover before a difficult trip to Adelaide next weekend.

Aloisi’s men shut down the champions

Possession might be nine tenths of the law, but if you don’t use it then the verdict will not be in your favour – as A-League champions Melbourne City are finding out in a stuttering opening to their title defence.

City had the ball for 66 per cent of the 90 minutes in the round three clash against Western United on Saturday night at AAMI Park but still ended up on the losing side.

It was their inability to find any creative solutions to the well-organised defensive set up that John Aloisi’s Western United employed that stymied the champions. 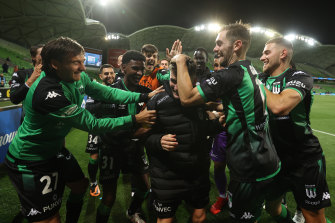 With four points from three games this has not been the power-packed start that most expected from Patrick Kisnorbo’s champions.

Saturday’s loss leaves them in an unfamiliar mid-table position. They have a perfect chance to get back on the winners list on Wednesday night against a travel-weary Perth Glory.

Western Sydney also remain unbeaten, but were fortunate to take all three points against a Wellington side who looked more fluent and creative but were, like many others, unable to capitalise on their possession.

There were complaints about the Wanderers’ opening goal when their Israeli striker Tomer Hemed scored, with the Phoenix claiming he had committed a blatant foul on Callan Elliot in the lead-up.

Sydney became another A-League powerhouse club to surrender a two goal lead in the opening rounds of the campaign.

After taking a 2-0 lead against Newcastle they allowed the visitors to get back into the game and Valentino Yuel’s second half brace gave them a share of the spoils, leaving Sydney third from bottom of the early season ladder. At least fans had the chance to cheer Elvis Kamsoba’s spectacular cartwheeling goal celebration.

In the A-League Women’s, Melbourne Victory women got their title defence off to a flying start, smashing Adelaide United 5-1 in a one-sided game at AAMI Park.

The game was effectively over as a contest when the hosts raced to a 4-0 lead at the interval. Adelaide tried hard in the second period but were no match for the titleholders. 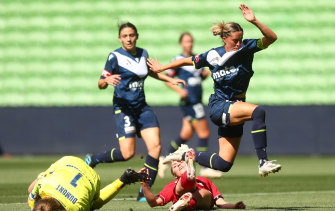 Lia Privitelli got into a scoring groove early, netting in both halves as she top-scored for Victory.

Kayla Morrison, Claudia Bunge and Catherine Zimmerman all got on the scoresheet with Fiona Worts netting for the Reds with what was little more than a consolation.

The only concern for Victory coach Jeff Hopkins was a leg injury to Morrison, the captain, who was forced off in the first half. V

Goal of the round

Yuel made himself the hero of Newcastle with his second half brace against Sydney. His second goal, when he took the ball in his stride and smashed a fierce shot past Andrew Redmayne was excellent.

Save of the round 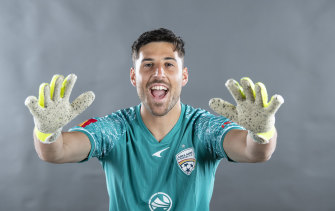 Quote of the round

“It’s a tough pill to swallow. I thought we were the better team throughout the game. I think, in my opinion, a poor decision in refereeing, a foul on Callan Elliot inside the box, led to the goal.” – Wellington Phoenix coach Ufuk Talay after Israeli striker Tomer Hemed’s goal was allowed to stand.